When you choose to sleeve up a Legacy deck with every color except for blue, you’re making a choice not to play some of the most powerful cards in the format. Brainstorm and Ponder are both restricted in Vintage, but fully legal here, and you’re opting to exclude them from your deck. You’d better have a plan!

Luckily, there are plenty of good ways to get card advantage. Dark Confidant is still one of the best creatures ever printed. This deck has an extremely low average CMC, with half the deck being 0s. The extra cards add up over time as you try to run away with the game. 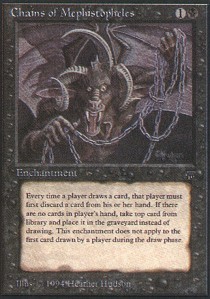 One of the most confusing cards ever printed is an excellent way to punish those blue mages for drawing extra cards. It also conveniently doesn’t impact your Confidant triggers. Chains of Mephistopheles doesn’t care about the first card each player draws during their turns, but it will punish you for each card after that. If your opponent casts a main-phase Brainstorm with Chains in play, they will begin by discarding a card for each of the 3 they’ll draw from Brainstorm—before having to put 2 cards back. The same is true when they activate Jace, the Mind Sculptor. It isn’t pretty. 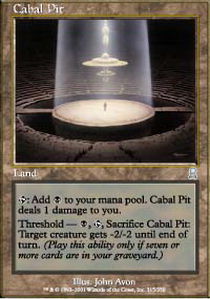 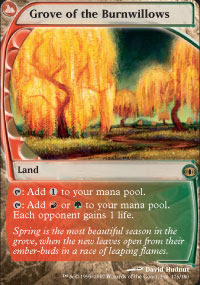 Knight of the Reliquary is your primary threat, and there’s a full suite of powerful lands to search for at the right opportunity. There’s Dryad Arbor for a creature, Cabal Pit for removal, Grove of the Burnwillows to start your combo, and Karakas to deal with Emrakul, Griselbrand, et al. There’s Maze of Ith to slow down attackers, or Wasteland to play mana denial. Each activation will grow your Knight for some extra powerful beats.

Green Sun’s Zenith finds Dryad Arbor for acceleration early and Knights late. There are also a few silver bullets in Gaddock Teeg and Scavenging Ooze for decks that are particularly vulnerable to them (although, keep in mind that Teeg will prevent you from playing any additonal copies of Green Sun’s Zenith).

Life from the Loam is value on top of value. It fuels itself in a pinch, as a Life from the Loam targeting nothing can start dredging to begin the value train. There are multiple cycling lands in this deck that you can return with Loam to draw extra cards (and protect your Loam from spells like Surgical Extraction—just respond to the Extraction by cycling to dredge the Loam back to your hand). You can even create Wasteland locks, as well.

Loam can also fuel your entire combo single-handedly. By dredging Punishing Fires into your graveyard, you can use Loam to return Grove of the Burnwillows and start building your machine gun.

Chalice of the Void is another great way to lock your opponent out and stymie cheap card draw. You conveniently aren’t playing 1-drops in your deck, so Chalice on 1 is all upside. 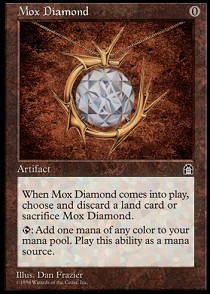 Mox Diamond will help you cast a turn-1 Chalice, an early Confidant or Knight, or start fueling Life from the Loams. 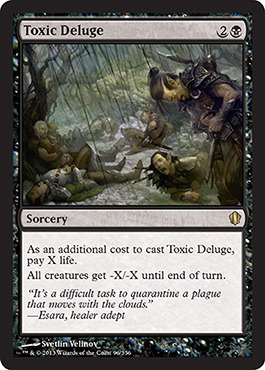 There are some tough threats to deal with in Legacy, but Liliana of the Veil can stop creatures and keep your opponent’s hand under control. With Life from the Loam going, your Liliana +1s are all value. Abrupt Decay catches many of the problematic Legacy permanents, especially Counterbalance. Toxic Deluge can sweep up even the biggest boards at a discount.

Blue is the most powerful color in Legacy, but all the other colors combined can present some formidable threats and ways to punish those pesky blue mages.

WILD_ISLAND_APPEARED, 5-0 in an MTGO Competitive League