Red mages often get a bad name in Magic circles. Their no-holds-barred, quick-game-is-a-good-game mentality makes them highly unpopular in some circles, circles that also don’t tend to appreciate damage spells being pointed at the face. But that’s what some red mages are here to do – use the top burn spells – and nothing’s going to stop them!

Except, perhaps, a small amount of incidental life gain.

Today we’re going to look at the top five burn spells printed throughout Magic’s history. Rather than offer a scientific or mathematological explanation of efficiency, or damage-per-mana spent, we’re counting down the sweetest, coolest and most iconic burn spells ever printed. Here we go! 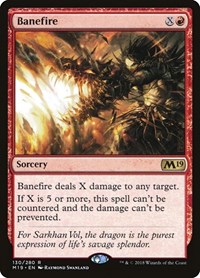 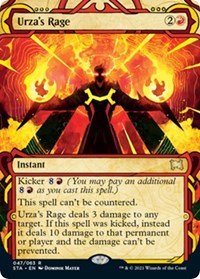 Anyone who enjoys playing control decks and has lost a game to a card like Banefire or Urza’s Rage (not just a boomer card now – it’s on Arena and everything!) will remember the sting of injustice that came with being burnt out with a hand full of counterspells. They’re not supposed to have burn cards against control, they’re not supposed to bring in damage spells against creatureless decks, but now you’re taking 10 and you can’t even counter it.

As a control deck unfolds its game plan, slowly stabilizing and strengthening its position in the game, the number of outs an opponent has slowly but surely gets smaller and smaller. Creatures? Wrath them away. Planeswalkers? Counter this one, kill that one. Burn spells? Hardly a factor if your life total isn’t precarious and you’ve got cards in hand.

And then cards like Banefire appear out of nowhere, leaving you deader than disco while playing a game you thought you were an ironclad lock to win. And the worst part – the worst part – is that these card are “bad” in matchups like this. So “bad,” in fact, that they’re often used to kill you on the spot!

Any control player will agree that there’s something monstrously unfair about making spells uncounterable. Blue mages don’t want you to play with your cards – any fun that you have with them is fun that they could be having instead. Banefire and Urza’s Rage are here to change that – now, your hand of counterspells is embarrassingly bad as they dome you for lethal. Should have played around it. 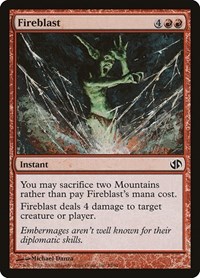 Speaking of unfair, have you ever lost to a Fireblast? If you’re a newer player, you might not have, but if you’ve ever seen a burn deck in Legacy or Cube, you’ll know the feeling. Your opponent is tapped out, you’re just about to stabilize, on four life – you make the play that should turn the tide of the game, and all of a sudden they’re chucking their lands into the bin and Fireblasting you for lethal.

Having a free, instant-speed spell that often will be the last one cast in a game can be such a brutal blowout – particularly if you aren’t expecting it. Against Legacy Burn, you might know to play around a Fireblast as best as possible, as they’ll usually play at least three copies (and sometimes four). Losing a Cube match to their single Fireblast, however, can tilt you more than a pinball machine. They just had to have it, didn’t they!? Just when you thought it was safe, they’d tapped out, you were home free – then, bam, four damage, you’re dead. 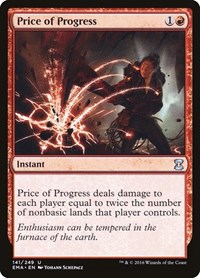 Speaking of Legacy Burn, there is one card that sets the deck apart from its Modern counterpart in terms of sheer damage output: Price of Progress. While Modern Burn players look to get about three damage or maybe four damage out of each of their cards, Price of Progress often offers four, six or maybe more!

While a deck like Death and Taxes plays infinite basic lands, not too many other Legacy decks do – even a “monocolored” list like Elves is usually splashing with Legacy’s excellent fixing, and only play a handful of basics as a result. Price of Progress, then, often stands to deal an absurd amount of damage for just two mana – it’s more or less Legacy Burn’s finisher!

Unlike Fireblast, it’s not a great Cube card (for obvious reasons, Cube decks tend to play a lot of basics), and it’s not legal in Modern or any of the more recent formats. You don’t tend to see Price of Progress all that much, but again, from a sheer damage output, it’s difficult to beat for just two mana. 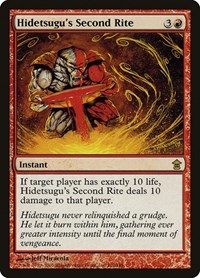 I didn’t really want to include this card on the list, because it necessitates me sharing a moment from one of my streams I’d really prefer to be forgotten. Unfortunately, I can’t delete my opponent Martin Juza’s clips, so rather than be cyberbullied for trying to hide my shame, I’ll be brave and own it. Here’s the time that I walked right into a Hidetsugu’s Second Rite, by gaining the perfect amount of life needed.

I talked about how tilting it can be to lose to a Banefire or to a Fireblast, but those cards don’t come close to how terrible it feels to lose to Second Rite. You can’t help but feel responsible for your own demise – did I put myself on 10? Could I have gained or lost one more life? How can the universe be so cruel as to subject me to this fate?

From the other side of the table, when casting this card, it’s not as simple as winning the game. It’s so much more than that. It’s like unlocking an achievement, it’s like navigating a minigame, in the same vein as making sure your opponent doesn’t get their Doom Foretold trigger. Blasting someone for 10 with Second Rite is as satisfying for you as it is crushing for your opponent – if you’ve never done it, jump on MTGA and give it a go. It’s worth it. 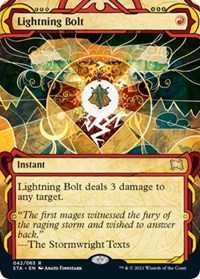 Dating back to Alpha, Lightning Bolt got a surprise reprint in 2009 after a decade on the bench – and the flavor text of this Magic 2010 reprint was a little self-referential as a result; “The sparkmage shrieked, calling on the rage of the storms of his youth. To his surprise, the sky responded with a fierce energy he’d never thought to see again.” I don’t know if people ever expected the Lightning Bolt reprint, but it only cemented Bolt’s place as one of Magic’s most iconic cards.

Bolt does it all – kills small creatures (most famously Birds of Paradise, hence the expression “Bolt the Bird”), contests planeswalkers and goes upstairs once you’re closing in for the kill. Throughout Magic’s history, only a handful of cards have permeated its culture with such resonance – Lightning Bolt is up there with Shivan Dragon, Serra Angel, Tarmogoyf and Jace, the Mind Sculptor for being a true icon of the game.

No one likes being burnt out – but losing to cards like these is hardly something shameful. They’re powerful, efficient and a huge part of Magic’s history. And hey, if you don’t like losing to Burn, maybe you should just start playing Circle of Protection: Red? If it was good enough for the boomers, it’s good enough for you!