Strixhaven: School of Mages has been out on Magic Online for just over six weeks and in that time, the set has had a rather large impact on Pauper. This is impressive as Pauper as a form is subject to inertia. As I’ve said before, a better Lightning Bolt isn’t coming anytime soon, and especially not at common. Releases that enter Magic first through Draft and Standard tend to be of a lower power level than the strongest cards in Pauper, so when a set immediately changes several decks, some new Pauper decks from Strixhaven warrant some examination.

It’s not that Strixhaven is a particularly powerful set. The general consensus is that it actually is a ratcheting back of the potency of sets like Throne of Eldraine. Rather, Strixhaven has a number of cards that are strong when put into the context of a larger format such as Pauper. Additionally, since Pauper lacks the powerful cards of other non-rotating formats, these cards have a chance to shine a little brighter. Today, I want to take a look at a few decks that have benefitted from the latest set and talk about their place in the current metagame. 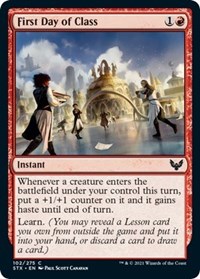 First Day of Class is a perfect example of the backwards compatibility of Strixhaven. While this card isn’t breaking anything, it has provided Pauper with a viable persist-based combo. Using Skirk Prospector and Putrid Goblin, First Day of Class can generate an unbound amount of red mana.

Various pilots have looked for different spouts. Some of the earliest builds of Goblin Combo used Skirk Drill Sergeant to flip over their entire deck while others leaned on Goblin Sledder and Mogg Raider to make arbitrary large attackers. Flamewave Invoker has come into vogue as of late as a way to end the game in short order while Pyromatics sees some play as a more click intensive kill. No matter what, these decks also include an Aristocrats element with Hissing Iguanar. Failing that, the deck can pivot into a beatdown strategy and win the old fashioned way.

Goblin Combo gives Pauper a more traditional style of combo deck, similar to other persist-based decks in other formats. The deck is potent but has some pinch points. First is that it has a number of key combo pieces that are red, which make it highly vulnerable to Blue Elemental Blast and Hydroblast. Similarly, a well timed removal spell can spell the end of the loop. While graveyard hate tends to be overplayed in response to several decks, a well timed Faerie Macabre, Nihil Spellbomb or Relic of Progenitus can stop the combo dead in its tracks.

The deck had a good showing in Challenges one weekend only to be hated out the next. Goblin Combo is a new deck that has had an immediate impact but absolutely needs the right metagame to thrive.

4
Hunger of the Howlpack
4
Vines of Vastwood 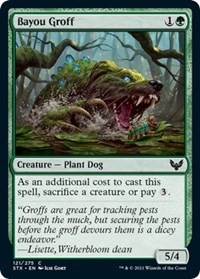 While Stompy is not a new archetype, it recently got to add Bayou Groff to the mix. Groff is a house and it’s hard to match it on rate on the second turn of the game.

In order to reap the rewards, Stompy has had to build its decks a little differently. Young Wolf, a staple that had found itself riding the pine lately, has made a return as fodder for its canine friend. Silhana Ledgewalker got the cut instead.

The other concession some pilots have made is swapping a few Forests for Khalni Garden. I have trouble getting behind the second change as starting the game with a one Forest hand is reasonable for Stompy, but if that land is Khalni Garden, you lose out on Quirion Ranger tricks.

Bayou Groff has made Stompy better in the early game against control decks. The ability to put five power on the board on turn two, as well as sometimes upgrading a one-power creature into a two-power threat, is a big deal and can shave almost a full turn off of Stompy’s clock.

On the other side of the coin, Groff makes Stompy more vulnerable to removal. Snuff Out is heavily played at the moment and using it on Groff is a no-brainer as it’s going to save you at least one life. Compare that to using it on a Nettle Sentinel without any adornments. That being said, Stompy has found new life thanks to the Plant Dog, reasserting itself as one of the best clocks in Pauper. 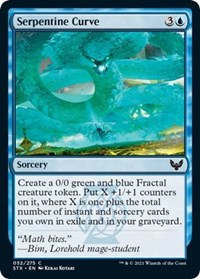 Serpentine Curve has breathed new life into both Dimir and Izzet Control. These decks want to spend the early parts of the game using cantrips to find high impact cards and then trade counters and removal for threats. Ending the game is often an afterthought. Serpentine Curve has the advantage of turning all of these resources into power later in the game and it’s not hard to create a 10/10 Fractal.

Despite their fragility, the token can end the game in short order. The best part about Serpentine Curve is that even if your opponent exiles your graveyard with Bojuka Bog, the text on Curve allows you to reap the rewards regardless.

The Dimir version is a more recent development, running a few copies of Gurmag Angler as an additional threat, but the Izzet builds have had more success overall. These decks also make use of Pieces of the Puzzle as a way to dig five cards deep. Pieces not only routinely draws two spells but it also adds several points of power to Fractals down the line. There might be some merit to testing Forbidden Alchemy in the Dimir builds since it’s an instant but it’s very hard to argue with drawing two cards as opposed to one.

The biggest issue with these decks is the fragility of their win condition. Pyroblast is one of the most played sideboard cards in the format and Fractals just so happen to be blue. Shrugging off Skred is a big deal, but if your Izzet opponents can bring in a counterspell that also happens to snipe your win condition once it’s resolved, well, you might be in for a bad time. All that being said, the fact that these decks get to play some of the most powerful cards in the format bodes well for them and I’m definitely interested in giving them a shot.

So there you have it – three archetypes that have gotten a significant boost from Strixhaven. There are others of course, including some builds that have gone deep on learn and Lesson. Even Flicker Tron has gotten in on the action, running copies of Prismari and Quandrix Campus. And with Modern Horizons 2 a few short weeks away, the table is set for a potent Pauper summer. But until then, I want to know – what decks would you like me to cover? Sound off in the comments below.