With rotation just a month away, many people will already be eyeing up decks that they can start playing now, in readiness for the loss of Ixalan, Dominaria, and the rest. Considering there are some pretty powerful decks that don’t rely on those sets for support–as I’ll show you in this article–it’s not a bad idea to prepare yourself for Throne of Eldraine by investing in a rotation-proof list. A month ago, I highlighted three decks that survive rotation, and today, I’ve got three more for you.

Elementals got off to a strong start after Core Set 2020 but have tailed off a bit in recent weeks as Field of the Dead and Sorin took over Standard. Jerry Joyce is doing his best to change that, however, with a wild Elemental brew that also features Neoform–and seeing as much of the deck came with M20, it survives rotation more or less intact!

By now, everyone is aware of the power of Risen Reef. It’s not exactly a big secret–there is a positive correlation between Risen Reef triggers resolved and game wins. Filling a deck with Elementals to make the most of this card is just the start. How about Neoform to find it more regularly? Omnath, too, benefits from this tutor effect, as another massive payoff card. I particularly like the inclusion of Spark Double here, as well, as if there’s one thing better than an Omnath, it’s two Omnaths. 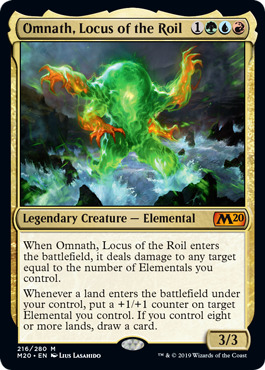 The disruption suite is a little understated, with just Banefire and Lava Coil to contest opposing creatures. I could see augmenting this (I don’t know how important Lazotep Plating is) but as a very creature-focused deck, you can’t afford too many un-synergistic noncreature cards. Plus, there’s always Chandra to bail you out–her -3 ability will be a Plague Wind against many decks.

As mentioned, rotation doesn’t hit this deck too hard at all. Banefire isn’t much of a loss, and the checklands and Unclaimed Territory can be replaced with whatever Throne of Eldraine brings us for fixing. Blood Sun is unlikely to be necessary once Scapeshift departs, and outside of those cards, everything else will still be around after the new set released. Not bad!

How about a no-frills beatdown deck? Wild brews are well and good, but sometimes you just want to get them dead with big green idiots. I came across this list and was enormously impressed by how streamlined and focused it was, balancing hard-hitting threats with a smattering of disruption to push through huge amounts of damage. Plus, almost the entire list survives rotation!

This deck packs a real punch. All the hard-hitting four-drops threaten to take over the game, but what I really like about this deck is the diversity of its threats. All these cards attack from a slightly different angle, so you can tailor your gameplan against the opposing deck as necessary.

Between Llanowar Elves, Marauding Raptor, and Domri, this list can get on the board very quickly indeed, and the raw strength of cards such as Nullhide Ferox or Ripjaw Raptor will immediately dominate games. I especially like this deck against small aggro decks, where these big green monsters will stop them in their tracks and demand an answer–but between the Ferox, Ambusher, and Spellbreaker, this deck looks to have real game against control, too.

It loses Llanowar Elves to rotation, which will definitely slow it down. Pelt Collector trades speed for power, but maybe you just want a two-mana dork, such as Paradise Druid, instead? Also lost to rotation is Reckless Rage, which isn’t a huge deal. While it’s sweet with Ripjaw Raptor, Lava Coil isn’t a massive downgrade. Finally, replace the Rekindling Phoenixes in the board with resilient threats like Chandra, Awakened Inferno or whatever red cards await us in Eldraine, and you’ll be all set. 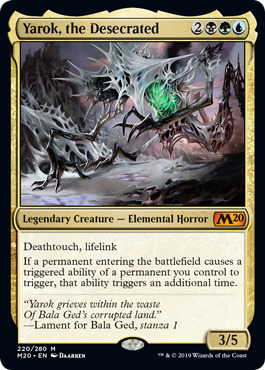 The broad consensus is that Field of the Dead decks won’t survive rotation, and without access to Scapeshift, this will broadly be true. However, while Field of the Dead won’t provide the lethal one-shots it does now, it’s still more than possible to churn out Zombies–albeit in a much slower and grindier fashion. There are quite a few creatures in Standard that put extra lands into play, and what better way to gain extra value from them than with Yarok, the Desecrated–which also juices up Field of the Dead!

Every non-Yarok creature puts extra lands into play, and Yarok, of course, speeds this process up significantly. He also works overtime in conjunction with Field of the Dead – an active Field plus Yarok means two Zombie tokens per land, as Yarok doubles the triggered abilities from all your permanents, not just creatures. It takes some setting up, but once the engine is online, you’re off to the races.

In order to get that engine online, there’s a best-in-class interaction suite. Assassin’s Trophy and Thought Erasure are tried and tested, while Disfigure is excellent against aggressive decks of all stripes. Additionally, Yarok himself is an excellent way to stabilise – not many decks can attack profitably through a 3/5 lifelink deathtouch creature.

As for rotation? Elvish Rejuvenator is a bit of a loss, it’s true, but may yet be replaced by another similar creature in Throne of Eldraine. No-one will miss Nexus of Fate – good riddance – and as for the checklands, there will almost certainly be more fixing come the next set. Overall, it’s staggering how little this deck loses to rotation.