With 1,850 players, the Modern Grand Prix at MagicFest Las Vegas provided a lot of data. Unfortunately, much of the information circled around the oppressive presence of Hogaak, Arisen Necropolis, which has since joined Bridge from Below on the scrap heap of postmodern history.

Five of eight quarterfinalists ran Hogaakvine: 62.5% as opposed to 13.1% at the starting line. The strategy “only” accounted for 34.4% of the Top 64, which is ban-worthy enough, but leaves ample material that remains relevant to explore.

This article contains information on all archetypes that cracked the Top 64 in Vegas and that don’t themselves contain either Hogaak or Faithless Looting. On average, each competitor at the tournament earned 12.3 match points. The 533 players with one or both of the recent ban list additions in their deck averaged 14 points, while the other 1,317 averaged 11.6 points. These are the baselines. 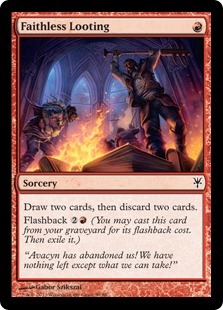 Eldrazi Tron delivered another above par performance, leaving each of its 69 pilots at an average of 13.3 points. The 67 Foundry inspectors did better still, averaging 14 points. This is another case where the Top 8 lists paint an incomplete picture. Two Eldrazi Tron and one Thopter Foundry deck made it to the playoffs, but the full Top 64 only featured another two of the former, compared to a total of five of the latter.

Originally, I had planned to write an article about the various Red Prowess builds in Modern and what set them apart. Well, I can tell you that of the 262 Prowess lists submitted for the GPs in Barcelona, Minneapolis, and Vegas, just 19 didn’t include a full playset of Faithless Looting, regardless of Arclight Phoenix or no Arclight Phoenix. This didn’t even constitute a proper control group, much less does it work as the sole remaining sample of relevance. They also performed worse than those who put their faith in looting.

However, they didn’t underperform by a lot: a difference of 1.1 match points on average. One player even broke through into the Top 64 of the Modern Grand Prix in Las Vegas with a ban-proof version.

This looks like a very good starting point for the modernized Modern. Others have used Blistercoil Weird instead of Kiln Fiend. But the downturn in reliable velocity without Faithless Looting only adds further appeal to a higher-impact card.

The Fiery Can(y)on of Burn

It remains unclear whether the more cerebral approach to red aggression bears more promise for the future—or the more simplistic. To say that Burn put two players into the Top 64 would be an understatement, as they placed 11th and 20th; at most GPs, a record of 12-2-1 would have granted entry into the Top 8.

Burn netted 13.1 points per player in Vegas, which is markedly above the average of 11.6 for decks unaffected by the bannings. While lists didn’t differ by much, once again the most successful contained more Horizon lands. Decks with six copies averaged 13.5 points, while decks with four or fewer averaged 12.3 points.

In other news, the archetype’s outlook has become wildly uncertain as Stoneforge Mystic is let loose on the format. Having to point a spell at a 2-drop and then still having to deal with Batterskull later, all of that before sideboarding, might prove too much for Burn. Then again, it might as well prove nice to find a target for Searing Blaze against some decks where previously there would have been none.

Infect delivered an uncharacteristically strong performance at MagicFest Las Vegas, averaging 14 points across 34 players. Three finished inside the Top 32 with matching records of 12-3 and largely matching lists in green and blue.

But not all poison proponents went that way. I want to highlight different take.

Collins was neither alone in running the unusual color combination nor the only one to post a winning record with it. While the vast majority of Infect players in Vegas made use of Blighted Agent, a small group made do without blue. The latter averaged 18.3 points.

One might want to leap to a conclusion, although the sample size doesn’t quite suffice to reach such a conclusion. The numbers do suggest that Green-White Infect deserves further investigation, though.

Humans outperformed the average of decks unaffected by the bannning as well, earning 12.3 points per player. Three of them finished inside the Top 64, all running the exact same creature configuration, except for one singleton Militia Bugler in whose place the other two had the fourth Phantasmal Image.

It’s not an unsettling advantage, but coupled with the decent sample size on either side it’s probably enough to consider the question settled.

Neobrand had put up consistently disappointing results across the GPs in Barcelona and Minneapolis, and then didn’t show up at all at GP Birmingham. In Vegas, the deck again found a surprisingly large following—and success too. Seven of 12 players posted winning records, and not just barely: two finished on 11-4 and another two on 10-5. The deck’s average was 18.3 match points, literally the highest of any archetype in the field.

If anyone can explain what caused the sudden about-face here, please leave a comment below.

There had been some experimentation in the past with Astral Cornucopia and Everflowing Chalice on one side plus Surge Node and Coretapper on the other. At MagicFest Las Vegas, we got a first look of what may be the deck’s final form.

At its heart, it’s a Karn deck, and one that can play the Great Creator on turn two. This particular version is even able to search for the card via Ancient Stirrings, while others ran Chalice of the Void in that slot. Leaving such differences aside, six Dice Factory workers averaged an impressive 16.3 points.

The Rest of Las Vegas’s Top 64

Three control decks based in white and blue reached the Top 64. But overall the archetype delivered a subpar performance, netting 11.3 points per player. Similar goes for Jund: comparatively few outliers outperformed Jund’s average of 11.7 points. With attendance numbers as high as 87 and 147, respectively, some control and Jund players simply had to do it.

Mardu Shadow, by contrast, averaged 14.1 match points across 28 players, buoyed by its win at the previous Modern GP in Birmingham. The two that broke through into the Top 64—and all the others too—were close copies of the same old list.

Hardened Scales was a different story. The two Top 64 lists both included three copies of Scrapyard Recombiner. A larger comparison strongly favored recombination as well, even while the majority remained unaware of this advance in technology:

Finally, the Top 64 featured one Devoted Vizier and one aggressive white Eldrazi deck. The latter looked similar in nature to what commonly goes by the name of Eldrazi and Taxes, albeit without Giver of Runes, Flickerwisp, and Aether Vial. If one were to count all white Eldrazi decks as a group, the eight players averaged 14.4 match points. The 21 Vizier devotees at the tournament even averaged 15 points.

You can find all Top 64 lists, and in fact almost all Modern lists from Grand Prix Las Vegas, on this Google sheet put together by Frank Karsten.