I’d like to start first by congratulating PV for getting immortalized on a Magic card after winning Worlds last year. I’m happy WOTC is doing this because it’s an extremely cool thing and I’m sure Paulo, Javier and all the previous invitational winners are extremely proud to have one.

Now let’s take a look at the actual card, which I think turned out really nicely.

For three mana you get a 3/1 flyer, which is normally decent if it has flash, but nothing to write home about if it’s just a regular creature. The Spellbinder however has a really cool ability, which is the reason to play it.

When it enters the battlefield, you get to look at your opponent’s hand and exile a nonland card from it. They can still play the card from exile, but it costs them two more. Basically, it puts a “tax counter” on one of their cards, which can be good for multiple reasons.

First, imagine you’re playing a fast aggro deck and all you’re worried about is a sweeper like turn four Wrath of God. White normally doesn’t have a lot of ways to stop it, so this will have a very unique effect on the game where it’ll make their sweeper cost six mana, which might just be too slow against your fast start.

Similarly, you can use it to disrupt your opponent’s combo to make their most important combo piece cost two more mana. Nice Mind’s Desire you have there, it would be a shame if it cost the same amount of mana as Ugin, the Spirit Dragon…

Second, remember that this effect doesn’t go away if Elite Spellbinder leaves the battlefield. This is relevant both because it’s nice to still have the tax ability after they get rid of the Spellbinder, but also because you can use it to your advantage by using blink or bounce effects to use your Spellbinder multiple times. 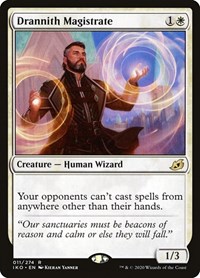 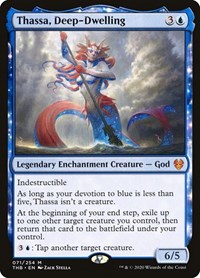 Good luck playing many more spells after that, now that you’re locked out of playing cards from your exile zone completely thanks to the Magistrate!

This card might also find home in something like Death and Taxes in Legacy or Collected Company decks in Historic and Pioneer.

The options are truly endless. The more I talk about this blink deck, the more I want to brew something up, so I think I’m just going to leave it for my article tomorrow and try to fit all of it in a 60-card Standard deck! See you then!