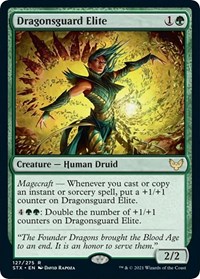 Dragonsguard Elite is joining the contest for best two-drop in Standard. The competition is stiff, with multi-format all-star Scavenging Ooze plus Brushfire Elemental, Luminarch Aspirant, Robber of the Rich and several more great options. That said, I wouldn’t be surprised is Dragonsguard Elite overtakes all of them. I failed to rank it in my top 10 Strixhaven Rares yesterday, but since then I’ve had a change of heart and wouldn’t be surprised if this turns out to be one of the strongest cards in the set.

When evaluating new cards, I find it helpful to have a base of comparison. So let’s start by talking about Dragonsguard Elite in the context of two other creatures that were Constructed all-stars in their time. 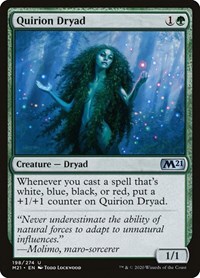 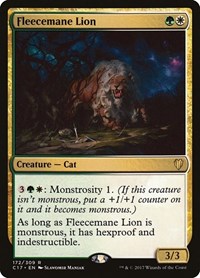 Quirion Dryad was used in U/G/x decks with lots of cheap cantrips and card drawing. Think spells like Opt, Frantic Inventory and Multiple Choice. You could chain these spells together and quickly make it the largest creature on the battlefield. You can similarly build around Dragonsguard Elite to make it a powerhouse.

The comparison to Fleecemane Lion is just as straightforward. Two mana for a creature that can attack as a 3/3 is a good baseline rate. The potential to grow more in the future makes it a rare case of a creature that’s good to play early, but also relevant in the lategame. Even something as simple as turn two Dragonsguard Elite, turn three Lightning Strike your blocker and add a counter can set you up for success going into the midgame.

It’s easy to ignore Dragonsguard’s activated ability, since it’s pricey and putting all of your eggs into one basket isn’t always a good idea in Constructed. However, I assure you that this will come up and it counts as a very real bonus. Imagine your opponent taps out against your 4/4 Dragonsguard Elite. Now you play your sixth land and attack. How can they block when you can make it a 6/6 and beat their creature in combat? How can they not block when you can take such a big chunk out of their life total. Sometimes this ability will put your opponent in a tough spot without ever needing to activate it!

Dragonsguard Elite can grow enormous, and as such is an appealing pairing with cards like Embercleave and Kazuul’s Fury. Importantly, Adventure spells add counters, making this a solid consideration even for decks that are heavier on creatures than on dedicated instants and sorceries.

The bottom line is that Dragonsguard Elite is simply a great rate. Since it starts as a 2/2, you don’t need much to make it a very solid creature, and if you’re willing to build around it a little bit, then the sky’s the limit.