Welcome back to Riley Ranks! This week, I’ll be looking at the first strangest counter types on Magic cards to date! 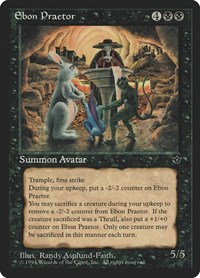 Let’s get these ones out of the way – all the weird counters that change power and toughness without just sticking to the straightforward and easily-understandable +1/+1 or -1/-1 formula. There are so many of these stupid counters, from +0/+2 to -1/-0 to +2/+2, and some of the cards mixed and matched them within a single rules text box! Ebon Praetor – which also has some of the weirdest art you’ll ever see – produced both -2/-2 counters and +1/+0 counters, which would have made tracking an absolute nightmare. 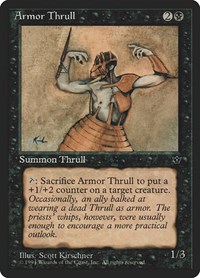 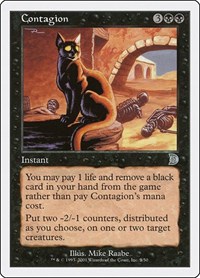 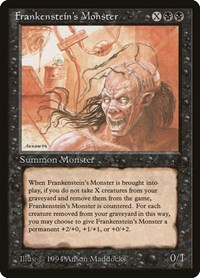 The list goes on – Armor Thrull generates a +1/+2 counter, Contagion generates two -2/-1 counters, while Frankenstein’s Monster can come into play with a combination of +2/+0, +1/+1 or +0/+2 counters on it! Thankfully, there are no counters that give +X/-Y or -X/+Y, but based on some of these old cards, you wouldn’t be surprised if there were!

Thankfully, we seemed to have moved past cards with all these weird counters and are just sticking with +1/+1 counters (alongside the odd set with -1/-1 counters every now and again, as a treat). The most recent one I could find was Lightning Serpent and its +1/+0 counters, printed in 2006’s Coldsnap. 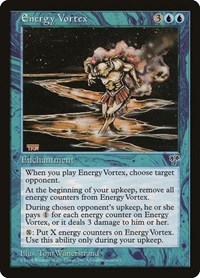 Vortex counters don’t seem that weird in the abstract really, but there’s an interesting story behind the only card that produces them. Back in 1996, Mirage saw the card Energy Vortex printed – a weird enchantment that does damage to your opponent based on how much mana you invest into it. The way this mana was tracked was with counters – but not vortex counters, as you may have guessed.

No – instead, Energy Vortex used energy counters, which made sense. After all, it’s a vortex made of energy, it doesn’t really matter which half of the name you used. Or, rather, it didn’t really matter, because 20 years later, in 2016, along came Kaladesh. With Kaladesh, came… energy counters. And these energy counters were put on players, not on weird enchantments from two decades ago.

As a result, and while “energy counters” is still printed on Energy Vortex, they have been officially errata’d to vortex counters. Just imagine the chaos and confusion if someone dumped a bunch of mana into their Energy Vortex, then tried to remove those counters to power up a Longtusk Cub – it’d be havoc. To avoid this rules madness, we now have vortex counters, so everyone who still plays the classic Kaladesh/Mirage Combined Block Constructed format can breathe a big sigh of relief. 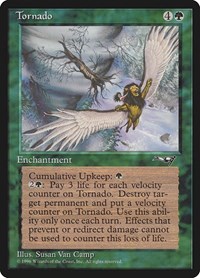 This wasn’t the only counter-based surprise from the Kaladesh block, however, and weirdly this next one also involved a card with whirling mass revolving around an axis line from exactly 20  years previous – in this case, the card Tornado, from 1996’s Alliances.

Tornado is one of those weird cards that generates two different types of counters. It has cumulative upkeep, so of course it generates age counters, but its activated ability also generates velocity counters. They’re used to track how much life it costs to activate its (quite powerful!) ability, and nothing more. 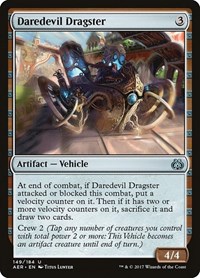 Velocity counters lay dormant for years and years, until two decades later when Wizards R&D decided it wasn’t enough to have one card, they needed a second. In Kaladesh, they decided to dredge up counters from 20 years ago, and so Daredevil Dragster was born, which generates velocity counters as well.

But in doing so, they finally went too far. Because now you can use Fate Transfer with an Opalescence out to move a velocity counter from Tornado to a Daredevil Dragster and draw those cards a turn earlier than expected, and pay three less life for Tornado’s activation. Checkmate, Wizards R&D. Bet you didn’t see that one coming. 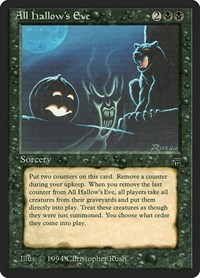 Scream counters appear on just two cards, both with very good reason. The first, All Hallow’s Eve, is a weird proto-suspend card, that used to use “counters” – just counters – to keep track of when its ability should proc. When Wizards did away with generic counters and instead gave them all types, All Hallow’s Eve was given the flavorful “scream” counter. Makes sense. 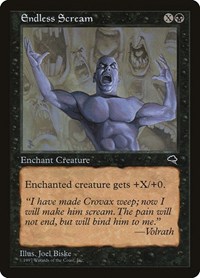 But the second card with scream counters is even weirder: an Aura called Endless Scream. Initially, Endless Scream didn’t even use counters – you’d pay X mana and give a creature a permanent +X/+0. As printed, however, Endless Scream had no way to track what X had been, which obviously works in an “I-can-just-remember-it” sense but doesn’t work so well in a “game-rules-dealing-with-it” sense.

As a result, Endless Scream was errata’d to use scream counters to keep track of how much mana was spent on X. Again – makes sense, and scream counters are a well-chosen type, given the name of the card. Or would be, were it not for the egregious flavor violation this card represents. “Endless” Scream, but with a capped, finite number for X? I think not. Hardly “endless”, is it?  Not to mention that the scream also ends if the creature dies.

Clearly, another errata is needed. Endless Scream, if it’s to live up to its name, should enter the battlefield with an infinite number of scream counters and should grant indestructibility to the creature. And hexproof from -X/-X effects and Sigarda’s ability to stop it from being sacrificed. Also, a recursive reanimation ability just in case the opponents gets around all that. It’s the only way to fix the card. Wizards, we’re waiting. 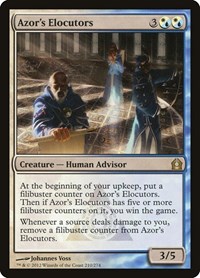 There are so many ways to bore your opponent to death while playing Magic, and many players delight in finding the most excruciating and torturously dull way to win a game. If you’re one of these players, it seems you believe that having fun is zero-sum. If your opponent is having any fun at all, that’s fun that you could be having instead.

But when it comes to boring your opponent to death, there’s no card that is quite as bare-faced about it as Azor’s Elocutors. They generate filibuster counters – named after the political process of “talking a bill to death” that seeks to obstruct legislation by talking for hours and hours and hours, dating all the way back to Cato the Younger from the Roman Republic.

Filibusters have seen politicians do everything from read the phonebook to share their favorite recipes for fried oysters, all in the name of having their way with the legislative process. Azor’s Elocutors does the equivalent by being paired with fogs, sweepers and often proliferate as well, to ensure that no one else is having any fun.

My favorite thing about the filibuster counters produced by Azor’s Elocutors is just how blatant they are. Just as with a real-world filibuster, they’re trying to bore you into defeat. While it does provide an outlet for the rather more evilly-minded Magic player, the filibuster counter is one of the sweetest marriages of gameplay and flavor, the likes of which you don’t often see.

That’s it for the top five weirdest counters in Magic. Apologies to fans of hunger, javelin or winch counters, but they didn’t quite make the cut. If you’ve got a suggestion for a list like this, make sure to send it through – my DMs are open on Twitter!