With the unveiling of Paulo Vitor Damo da Rosa’s new “invitational” card – the name given to cards featuring the likeness of a player – there’s been a lot of renewed focus on other such cards from throughout Magic’s history. Elite Spellbinder is an extremely sweet card, and it could end up being very powerful (especially when tribal synergies are taken into account in formats such as Modern), but how does it stack up against the playability and power level of other invitational cards?

(Invitational cards are called that, by the way, due to an old tournament series known as the Invitational, the winner of which would work with Wizards R&D to create a card with their likeness on it.)

PV’s is only the 13th ever printed. Having your likeness on a Magic card is a very rare honor, but of the previous dozen, some have gone on to become format-defining powerhouses. Today, we’re going to count down the five most powerful invitational cards from Magic’s history. We’re evaluating these cards in a vacuum – sorry Magic boomers, I know back in the day your two-mana 2/2s had to have downside and walk uphill through the snow both ways, but it’s 2021 and 6/6s now cost three mana. Get with the times. 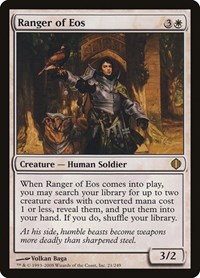 Antoine Ruel won the 2006 Invitational, bringing about his depiction on Ranger of Eos in Shards of Alara. Ranger of Eos sees some fringe play these days, across a handful of formats – it’s legal in Historic, thanks to Historic Anthology 2, and occasionally gets included in the odd Modern deck here and there. However, it’s hardly a format staple in either Historic or Modern.

Its narrow ability means it only wants to go in one kind of deck – lists filled with cheap creatures that are looking for a little bit of late-game oomph. Sometimes it’s low-to-the-ground aggro decks, although a four-mana 3/2 isn’t exactly hot property in an aggro deck. Other times, it’s a creature-based combo deck, where the Ranger can go and get a key piece (Viscera Seer, Walking Ballista, etc.).

Overall, however, Ranger of Eos hasn’t made a long-term impact on any format, and hasn’t become the centerpiece of any lasting competitive archetype. It sees a decent amount of Commander play, but outside of that and some fringe Historic archetypes, Ranger of Eos has a pretty quiet time of it. 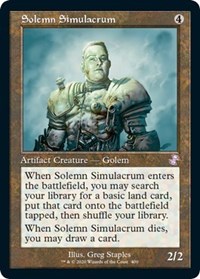 First printed in Mirrodin thanks to Jens Thoren’s 2002-2003 Invitational victory, the “sad robot” is an extremely popular choice for Commander players that’s been included here and there in 60-card formats over the years. Solemn Simulacrum is the definition of a workhorse card. It provides value both coming and going, it’s playable in a broad range of decks but it’s never the headline act.

A recent reprint put the spotlight back on Solemn Simulacrum and it’s seen a bit of play in Standard since joining the format, but remains a somewhat fringe player. In older formats, it remains too slow and clunky to be included, and despite its ubiquity in Commander, it’s never made the leap to Modern and doesn’t even see much action in Historic.

One final interesting note about the sad robot: after fixing and ramping your mana, Solemn is the first line of defense when it comes to chump-blocking, as everyone wants to draw that card. In fact, I wouldn’t be surprised if Solemn Simulacrum has chump-blocked more damage than any other creature in Magic’s history! 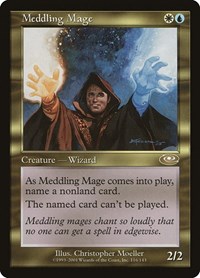 Meddling Mage came about thanks to Chris Pikula’s win at the 1999-2000 Invitational, and bears the face of the anti-cheating stalwart and tragically-spurned Hall of Fame candidate. It’s an iconic card with a powerful ability, and even today can be found in decks from Legacy to Modern to Historic.

The card is often used in creature-heavy strategies to lock opponents out from their removal and sweepers, or conversely to prevent the opponent “going off” with their one key card. Against decks without diversified removal portfolios, Meddling Mage can be enormously frustrating. Use it to name their one sweeper and they’re powerless to deal with your board.

In Modern, it represents an important part of the disruptive capabilities of Five Color Humans, the deck that Eli Loveman used to take down a Mythic Championship. For Historic, it’s sometimes included as a prison piece in various decks that can support it. In Legacy, the card’s a very popular sideboard card indeed, being included in decks such as Aluren, Loam and Miracles. 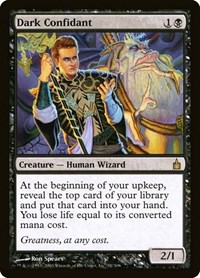 Bob Maher won the 2003-04 Invitational, and the result was one of not only the most powerful Invitational cards ever printed, but one of the most powerful creatures ever made. Dark Confidant provided real card advantage while advancing your board and came down as early as turn two to do so – the card was incredible.

But how the mighty have fallen. At one point, Dark Confidant was amongst the best creatures in Modern, if not the very best altogether. No self-respecting Jund player would even consider sleeving up any fewer than four copies. Dark Confidant was a must-kill threat in Modern Jund, representing everything that the deck is trying to do – inch ahead with incremental advantage, using every resource at their disposal.

These days, however, “Bob,” as Dark Confidant is often known, has been relegated to the sidelines. So many powerful two-drops have been printed since Dark Confidant’s heyday that he hardly gets a look in, these days – instead, Jund’s principal two-drop card advantage engine is Wrenn and Six. Time comes for us all. 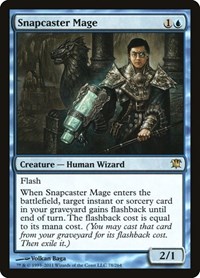 Undoubtedly, the most powerful invitational card ever was also the last one printed before their recent revival with the World Championship cards – Snapcaster Mage, featuring the winner of the 2007 Invitational, Tiago Chan. Snapcaster Mage was dominant in Standard and became an immediate Modern staple as well, where it still sees a good amount of play.

You could argue that Snapcaster Mage’s best days are behind it, and I think most would agree. Classic Modern Bolt-Snap-Bolt strategies have largely died out – tempo-based Jeskai lists aren’t around, Splinter Twin-style decks don’t exist and even Azorius Control lists don’t always play the full four like they used to.

Still, the raw power of this card can’t be denied. Whether Tiago is flashing back a counterspell, removal or card draw to pull further ahead, Snapcaster Mage is always doing work. When you’re behind, there’s also the emergency Ambush Viper mode; when you’re ahead, there’s Snapcaster-Cryptic Command-bounce-my-Snapcaster. It does it all, and it’s difficult to argue that Snapcaster Mage is anything other than the best invitational card ever printed.

As for Paulo’s card, Elite Spellbinder, it remains to be seen. Where will he stack up? I wouldn’t be surprised to see Elite Spellbinder on an updated list in the coming years, especially once it’s been given a chance to flex its muscles in older formats. Undoubtedly, it’ll have an impact in Standard, but it has Modern and perhaps even Legacy potential. If it catches on, PV will be up there with Bob Maher and Tiago Chan as the face of one of Magic’s iconic and powerful creatures.