Initially, I planned to write this article a bit sooner, but a ban happened and a surprisingly impactful set for Modern was released. I’ve had to play a bit with the new cards in this “new” format to have a better grasp of what changed. So here I am, hopefully still in time for your next Modern event (whatever it is, an FNM or the upcoming Pro Tour). I will present the decks I’m working on a little later, but first, the most asked question of the month:

“What do you think about Abzan/Jund after the Splinter Twin (and Summer Bloom) ban?”

The majority of players tend to think this was bad for BGx. I don’t blame them for this line of thinking considering that Twin was a good matchup for BGx since day 1. The “full combo” version of Twin was indeed a good matchup, but it has evolved into a value deck that happens to have a combo—I thought the matchup was pretty even against an experienced Twin player.

I haven’t beaten Patrick Dickmann on MTGO in five or so matches. It is so hard to sideboard accordingly to fight through Keranos, Jace, and Pia and Kiran while keeping Abrupt Decays in to disrupt the combo that you are not even sure they still have. Some argue that these players will migrate to decks like Grixis Control. I agree, but I would rather play against those decks all day than any version of Splinter Twin.

Another “upside” of the Twin’s ban is that you are no longer “forced” to play 4 Abrupt Decays in your main deck. A few months ago, Reid Duke played a version of Jund with the full playset of Terminate, and only 2 Abrupt Decays. While I thought that was insane at the time, it may be a much better setup now. Terminate has become much better while Abrupt Decay has gotten much worse in the face of our new Eldrazi overlords.

As for Summer Bloom—RIP. I won’t miss you at all. I had to pack a decent amount of hate to fight you and most of the time it wasn’t enough. Good riddance.

In the end, I feel the bans were actually good for the Abzan players. Note that I said Abzan and not BGx. In the new world ahead of us, Lingering Souls is more important than it used to be, so try stock Jund at your own risk.

There are a number of unbans that could shake up and diversify the format, but c’est la vie. I wanted to play my one true love, Bloodbraid Elf, once again (I played in Legacy before the MOCS and it was great as long as I wasn’t dying to Storm on turn 1). I’m relieved it wasn’t unbanned now. I know I would just close my eyes and play it if possible, despite now knowing that Jund is poorly positioned. By not being able to play it, I’m forced to improve my chances to do well at the Pro Tour since I believe all other flavors of BGx are superior.

5 Decks I’m Testing for the PT

I thought a lot before deciding to write about my current work for the Pro Tour. Even though I work alone 99% of the time for Modern PTs, I still have a team of friends that I talk to and collaborate with. I wrote in my last article that we decided we wouldn’t have a testing house this time. Most people just play their favorite decks anyway, and last time it was actually a bad experience since our decks became too inbred. That led to an overwhelming failure for everyone who made too many decisions based on our house testing. Despite this, I will meet the team we will inevitably talk about decks, lists, new cards, and sideboard options. It would be a betrayal to share their findings so instead, I’m writing about my own thoughts before then.

These builds are somewhat untuned and unfinished, but show a lot of potential. I’m going to play one of them unless someone breaks the format.

It’s fun that we have a “new color” to pair with good old BG. Don’t be fooled by colorless mana. It should be treated as any other color when building your mana base.

The biggest appeal here is the ability to play a lot of colorless utility lands since you have only two colors. It gets better in that the colorless lands let you play extremely powerful Eldrazi cards—notably Thought-Knot Seer and Matter Reshaper (a.k.a. the colorless Lingering Souls). Unfortunately, Reshaper is cool, but falls far short of Lingering Souls. Specifically, it makes your matchups vs. Infect and Affinity much worse. The deck also loses a lot more to Abzan than I would like, since Siege Rhino suddenly outclasses the entire deck. 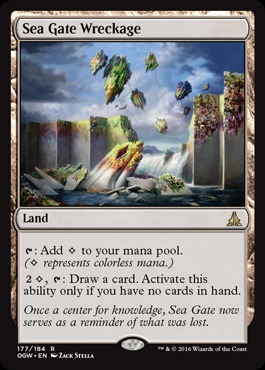 Not everything here is bad. This list taught me that the biggest draw to playing colorless lands is Sea Gate Wreckage. This card is incredible in midrange wars—usually much better than any manland. My experience with the card here was so great that I started trying it in every shell.

This was my second attempt. Souls replacing Matter Reshaper felt really good. Tidehollow Sculler was stellar and Wasteland Strangler performed much better than expected. Pack Rat was the other experimental 2-drop of choice. Dark Confidant is pretty poorly positioned right now and I wanted another 2-drop. It turns out turn-1 discard into turn-2 Pack Rat can be ridiculous in Modern, at least if you’re not playing against unfair decks. Unfortunately, Modern is full of these. I believe that most people missed Mutavault as a colorless source. Not only does it “fix” the colorless mana, it synergizes pretty well with Pack Rat. Activating a manland for 1 mana is so great that I forgot it was real.

I was feeling incredibly good with the deck until I started testing against Lantern. This reminded me how important it was to have access to Abrupt Decay. This isn’t unique to Lantern, as Decay is good versus a plethora of decks, but it only took me a few quick losses to a turn-3 Ensnaring Bridge to realize that I did not want to enter the Pro Tour without Abrupt Decays.

This was the natural evolution of the previous deck. I wanted Abrupt Decay, and Pack Rat is no Tarmogoyf. Without Seer, I needed another Processor enabler.

Scavenging Ooze fills this role pretty well. This was also an attempt at lowering the curve a bit by not playing 4-drops—instead having late game in the form of Wreckage and manlands. In the end, the late game was not strong enough and the mana was hideous. The deck needed to change and I moved away from Processing.

The mana here looks shaky but it is much better than it appears. I’m happy with this list. It has a good balance of disruption, late game power, tricks and new cards.

Eldrazi Displacer does a lot of work. Besides the obvious blink tricks (and the dream with Rhino), being colorless is a big deal in providing answers to Etched Champion and Apostle’s Blessing. In the end it might be too cute, but I was extremely impressed by this card that I initially declared unplayable in BG builds. I was most likely wrong. This is pretty close to a traditional Abzan list, with more disruption and better utility lands in exchange for worse mana and a softer matchup against Burn. I have faith that someone can tune this into a tier 1 deck, but I don’t have the time to do so.

This is my frontrunner and would be my list if the Pro Tour were tomorrow. The astute reader will notice that this list is two cards off the list I played at GP Pittsburgh. One of those cards is a land. It even has 61 cards (eek). The only changes from the GP list are to replace a Liliana with another Lingering Souls and to swap out a Stirring Wildwoods for a Hissing Quagmire. I expect a Pro Tour full of Burn, Affinity, Infect, mirror matches, and combo. I am comfortable with my matchup against all of them with this list.

My win percentage with this version in my testing has been very good and a lack of brewing time may skew my choice. I’m sure I wouldn’t regret running this.

What about the Eldrazi menace?

Yes, this is supposed to be bad for BGx. Personally, I’ve tried a few versions of it (before Oath of the Gatewatch) on MTGO and I agree that the deck can be really powerful. I was super pumped at first, but my win percentages versus Twin, Burn, and Affinity were abysmal. Even though Twin is gone, I don’t want to play a deck that I suspect is a dog to two of the most popular decks left in the format. You know what deck put up a surprisingly even matchup? BGx. Sometimes a couple discard spells with some pressure is all you need.

If you ask me, “Should I give up BG because of Eldrazi”?  my answer is, “Hell no!” “Should I pack a ton of hate?” Also no. You have to respect it and adapt. Maybe run a third Thoughtseize main since Inquisitions are pretty bad against them. I would definitely run the full set of Fulminators. Personally, I don’t want to lose a lot of my edge in other matchups to try to improve against a new deck that I’m not even sure I know the best build of. There are so many ways to build it.

What will you have in the sideboard?

Another thing to consider: If you are playing enough colorless lands, Warping Wail is a hell of a card. It counters Scapeshift, Living End, Past in Flames, and a lot of other relevant spells. It can save a big creature from Liliana of the Veil and kill many relevant creatures (even Deceiver Exarchs and Pestermites if those Twin players want to try hard). I would recommend between 10-13 colorless sources to cast it reliably.

That’s it for today. I hope I’ve helped someone preparing for upcoming events. I would love to have some backbreaking tech but, as of now, I do not. Maybe someone can take one of these lists and tune it into something great. Who know? I’m always open to suggestions and criticism, so if you have anything to say about these decks, let me know in the comments.

And always remember: There’s no better answer to an unknown deck than “turn-1 discard, turn-2 Tarmogoyf.”

Willy Edel has been playing Magic for 18 years, which eventually became a full-time career as he now owns a store in Brazil. With an astounding 2012-13 season, Willy hit Platinum, made the Brazil National team, and will compete at the Players Championship. Starting the season with points from the World Magic Cup and Players Championship, he should be well positioned to have another great run.