I’m a sucker for a graveyard deck and today’s list scratches that itch.

Dimir Exhume is a Pauper control deck that operates in a similar fashion to Delver of Secrets – Gurmag Angler builds. It wants to resolve a threat and then ride it to victory. Where Dimir Exhume differs is that rather than Delver of Secrets its non-Angler threat takes the shape of Striped Riverwinder. Cycling Riverwinder into the graveyard can help Dimir Exhume find its namesake card – Exhume – and then bring back a 5/5 hexproof. Dimir Exhume belongs to the same family of decks as Dimir Faeries but it plays out rather differently. Here is my list, based upon one that went 5-0 from Flylemur.

Dimir Exhume wins through attacking with its five power creatures. Sounds simple, right? Unlike other Gurmag Angler decks that we see these days, Dimir Exhume wants to get a 5/5 out as soon as possible. The fastest way to achieve this is to cycle a Striped Riverwinder on the first turn and have a Swamp ready for a turn two Exhume. The result is a massive hexproof creature that can absorb most attacks and then crack back for huge chunks of life. Alternatively, the deck can play a slower game in the early turns, trading with Prohibit and Cast Down before turning to Thought Scour to put the final few cards into the graveyard and then bam – Gurmag Angler. 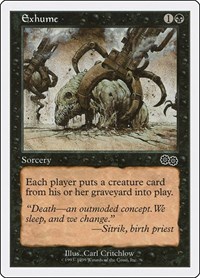 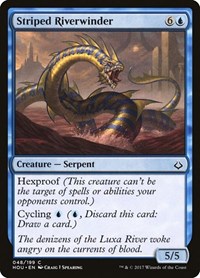 Like other “Delver” style decks, Dimir Exhume is a tempo-control deck. Rather than trying to gain tempo through board position, it seeks to invalidate its opponent’s early plays by simply outclassing them. Most decks are not playing threats that can beat a 5/5 heads up and Dimir Exhume can use its removal to break up stack blocks, winning advantages during the combat step.

Dimir Exhume’s game plan is mutable. If an opening hand has an easy route to a turn two or three Riverwinder it should almost always take that line. The exception is when you know you are playing against a deck with Chainer’s Edict or a deck that can Spellstutter Sprite your Exhume. Failing an opening hand of this level, you should be assuming the control position. You want to stay alive long enough to clog the board with giant creatures. Be careful with your removal as Exhume is symmetrical so anything you take out is liable to come back later. The deck can mitigate this by playing Bojuka Bog before it goes for Exhume. Little feels worse than Exhuming back their Mulldrifter or Palace Sentinels.

Exhume might seem like a risky card given the abundance of graveyard hate in Pauper, but the way the Urza’s Saga sorcery is worded enables some tricky plays. Since Exhume does not target you can get around removal by putting another creature into the graveyard before resolution. For example: it’s turn three and you have two Islands and a Swamp and you have a Striped Riverwinder in the graveyard plus one in your hand. You draw Exhume and the coast is clear. But what’s this? With Exhume on the stack your opponent uses Faerie Macabre to exile your Riverwinder. What you do, before Exhume resolves, is cycle the Riverwinder in your hand. Now unless they have another Macabre, you end up with a 5/5 on the board. 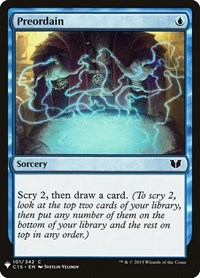 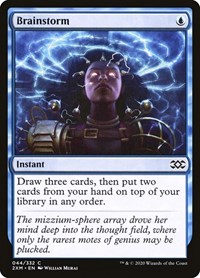 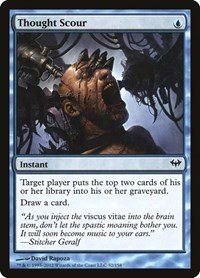 Preordain is the primary cantrip in this deck but Brainstorm and Thought Scour do some heavy lifting. Dimir Exhume runs both Ash Barrens and Evolving Wilds which amps up Brainstorm. Thought Scour, however, is almost as good. After a Brainstorm it can bin the top two cards provided they are dead. So if you have two creatures in your hand that you would rather see in the graveyard you want to hold on to  your Brainstorm or Thought Scour until its partner arrives.

The only time you want to keep an opening hand that relies on Exhume is if you have access to blue and black mana while also having a Riverwinder in hand. If your hand has these and everything else is a blank, it is reasonable to keep it in the dark. That being said do not be afraid of mulliganing – between Preordain, Thought Scour, Brainstorm, Augur of Bolas, and Striped Riverwinder the deck can undo mulligans rather well.

When fetching out lands, I like to ensure that I have an Island before I go searching for a Swamp. That being said I put a high value on having a Swamp out thanks to Snuff Out. Snuff Out allows Dimir Exhume to tap out for a key play while having a potential answer in waiting. 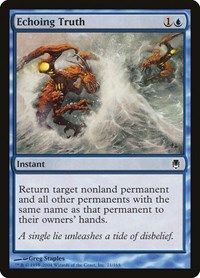 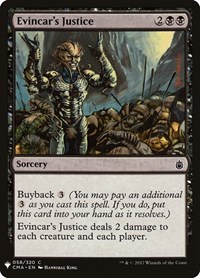 Dimir Exhume has game against most of the top of the Pauper metagame. It has enough disruption and countermagic to fight against Spellstutter Sprite decks, provided it does not walk into the Sprite itself. Against slower Boros Monarch decks, Striped Riverwinder can do some damage as it can be nearly impossible to get off the board. The token builds of Boros are tougher to handle but between Echoing Truth, Evincar’s Justice, and Shrivel out of the sideboard it can keep tokens in check. The toughest matchups are Stompy – which can go very wide with Burning-Tree Emissary – and decks that pack plenty of copies of Chainer’s Edict.

The goal against most aggressive decks is to get down an early threat. Here, Striped Riverwinder is best but Gurmag Angler is not far behind. The idea is to have a wall that can eat attackers while you dig for removal and Unexpected Fangs. Once Fangs are no longer unexpected, you can start turning a creature sideways and bolster your life total. Do not be afraid to use Snuff Out early if it is going to save you more than four life over the course of the game. Against Stompy, try to save Snuff Out for River Boa since it turns off regeneration.

Dimir Exhume versus midrange is an interesting matchup. As discussed, black based midrange is tough. Black midrange decks tend to overload on removal and run several copies of Chainer’s Edict. Even if you are able to resolve an early threat, protecting it is a big ask as you have nine actual threats in the maindeck, and four copies of Chainer’s Edict can eat eight of them. But if they aren’t running black the big thing is keeping your life total high enough while Striped Riverwinder crunches in over and over.

Control in Pauper means Flicker Tron and Dimir Exhume has an okay matchup against the current king of the hill. Here the deck has to assume a hyper aggressive role and look to resolve a 5/5 as early as possible. Once it does it needs to ensure it can deal enough damage before a Moment’s Peace lock comes online. Mulldrifter is also a good option here as it can bin itself for Exhume while keeping your hand full.

Dimir Exhume is a fun twist on a well established archetype. If you’re looking to try something a little different in Pauper, I highly recommend taking it out for a spin.