I’m always on the lookout for hot new tech – and in a format like Modern, with such a massive card pool, you’re bound to find some diamonds in the rough every now and again. While the format is awash with Burn, Blitz, Heliod Company and Azorius Control, there have been some brave, trailblazing wizards who have wrought a path of destruction through both their opponents and the established orthodoxy of Modern.

Today, we’re going to have a look at three lists that have taken down recent Modern Leagues on MTGO, all of which can be tweaked here and there to bring within the range of an acceptable budget. We’ve got a touch of aggro, of course, but there’s also some newer takes on older combo archetypes that are sure to pique your interest. Let’s get to it!

Jeskai Ascendancy was a combo deck that saw play in both Modern and Standard many years ago. It revolves around a resolved Jeskai Ascendancy being used to untap Fatestitcher, which can then untap a land to cast another spell, untapping the Fatestitcher. Wash, rinse and repeat and you’re left with a massive Fatestitcher and a soon-to-be-dead opponent.

The deck kind of faded away after awhile, but MTGO player Nilsfit is looking to change that. Cutting green and the Birds of Paradise that it supported, this build is straight Jeskai. With powerhouses like Monastery Mentor and Teferi, Time Raveler, there are some significant upgrades to the deck’s overall power level, and Theros Beyond Death combo piece Underworld Breach also joins the deck to give it a bit of extra longevity.

With so many one-mana spells, most of which replace themselves, this deck is both quick to enact its game plan once online, and relatively consistent thanks to the velocity with which it can burn through its library to begin with. Lightning Bolt and Path to Exile are both first-rate removal spells, of course, and you even get Jegantha, the Wellspring as a free throw-in, as there are do double-costed cards.

The biggest problem with this deck when it comes to Modern on a Shoestring is, of course, the price tag. However, more than half the deck’s cost is tied up in the lands – between Scalding Tarn and Flooded Strand, that’s about $400. Scrap the fetchlands and bring in our reliable old friends the painlands – Adarkar Wastes and Shivan Reef – and you’ve saved yourself hundreds. The sideboard Kozilek, Butcher of Truth may not be strictly necessary and will save you around $70.

Outside of these pricier cards, there’s hardly anything that’s too bad – Teferi and Monastery Mentor are $15, and Mishra’s Bauble is only $3 these days (remember when it was $50?). In fact, after reworking the mana base, this deck comes in pretty cheaply – just remember that you want proper duals, rather than Pathways, to facilitate both the strict mana requirements of Ascendancy and make Fatestitcher untaps as straightforward as possible.

Mono-Red Aggro is a known quantity and a solid Tier 2 deck in Modern, but what about Mono-White instead? White Weenie is one of those decks that comes around every once in awhile, and even if it isn’t making huge waves in Modern right now, it could be an interesting deck with which to get in on the grounds floor.

With a stack of powerful one-drops, the taxing effects of Thalia, Guardian of Thraben and Archon of Emeria, plus utility cards like Path to Exile, the rarely-seen Force of Virtue, and one of the most satisfying “gotcha” cards ever printed in Mana Tithe, this deck offers a breath of fresh air. It also makes incredible use of Mox Amber – and history tells us just how good Moxen are when they can be reliably made use of.

Mox Amber really is at its best here. Between Isamaru, Hound of Konda and Kytheon, Hero of Akros, it won’t be unusual to play two one-drops on turn one. Even outside of those two, there’s Thalia, Brimaz, King of Oreskos and Mangara of Corondor. A Mox-powered start is going to be tough for a lot of decks to properly contest, and even sweepers won’t always do it thanks to Selfless Spirit.

We haven’t seen much from Force of Virtue. Anthem effects are strong, and this one threatens to be played at instant speed, for zero mana – not bad, especially when you can pitch cards that outlive their usefulness, such as redundant copies of legends or Mana Tithe in later turns. A surprise end-step Force of Virtue could win a game out of nowhere.

In terms of budget, this is a reasonably affordable deck as-is, but of course there are some improvements that could be made. Brimaz could become Reidane, God of the Worthy for extra taxation effects (and the shield side has utility against decks like Storm, if that ever comes up), and the Eiganjo Castle and Sunbaked Canyon are nice but not essential. As for Mutavault, it’s conceivable that you could switch the Plains for their snow-covered counterparts and play the cheaper Faceless Haven. 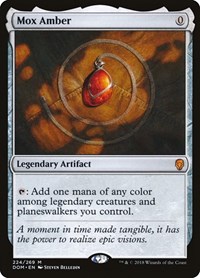 The only real issue is Mox Amber, at $33 apiece. There’s no getting around this – Mox Amber is expensive but essential to this deck. If you remember Affinity before Mox Opal was banned, you’ll remember the difference between Opal and non-Opal hands, and Amber is very similar here. Cutting Mox Amber will drastically lower the power level of the deck – $33 each is a bitter pill, but I think you have to swallow it here.

Living End has always traditionally been played in the Jund colors. You’d cycle away your Monstrous Carabids and Deadshot Minotaurs, cast Demonic Dread or Violent Outburst and Living End your way to victory as early as turn three. Just like Jeskai Ascendancy, Living End has faded from competitive relevance, but these days people are taking a new approach.

With more recent cyclers from Amonkhet and Ikoria: Lair of Behemoths, plus a newer Living End enabler in As Foretold, Living End decks now base themselves in blue, with a light white and black splash for a little bit of utility (and to hard-cast cyclers like Imposing Vantasaur, if it comes to that). Best of all, the deck is very cheap – turns out bad cycling draft chaff isn’t all that expensive.

As ever, the deckbuilding restrictions imposed by Living End mean you can’t play one or two-drops, but there are some clever ways to circumvent that issue. Failure // Comply does a decent impression of countermagic (and Comply can even shut off opposing interaction when going off), while Generous Gift is… well, it’s not Path to Exile, but hey, it’s doing its best.

With Ardent Plea and As Foretold, you have eight ways to cast Living End, and some of the cycling cards offer bonus effects when cycling, such as Waker of Waves and Faerie Macabre. On the face of it, I feel that this deck looks a fair bit better than its Jund predecessor, and being able to bring in cards like Mystical Dispute post-sideboard only strengthens its case.

As for its cost – again, more than half the deck’s price tag is locked up in lands, and one land, in particular: Polluted Delta. This deck is only splashing white and black, so it’s very much base blue. With that being said, I would absolutely use Pathways as a replacement. I do like the Sunken Ruins however, given both Street Wraith and Faerie Macabre. Bringing the mana base under control is very straightforward, overall, as you just bring in pathways instead of the more expensive lands, and all of a sudden you’ve got a deck that costs somewhere in the realm of $200 or so.

All these decks have demonstrated that they’ve got what it takes to run with the big dogs of the Modern format, and most of them could stand to have their price tags cut down to size without significant sacrifices in power level (just don’t cut Mox Amber). It’s great to see rogue lists like this doing well – especially when they don’t cost an arm and a leg!