Hardened Scales once was a real force to be reckoned with in Modern. It made it all the way to the finals of the Modern Mythic Championship in Barcelona in 2019, before the nasty Tron player Thoralf “Toffel” Severin cruelly dreamcrushed poor Alvaro Fernandez Torres. These days, it’s taken a bit of a back seat, principally thanks to the banning of Mox Opal.

Still, the rest of the deck remains available, and there are brave souls out there who tirelessly plug away with the deck, attempting to find a version that can work in today’s increasingly polarized Modern field. Things are splitting down the middle between the blazingly-fast, get-ya-dead decks such as Burn and Blitz, and the slow, controlling lists like Azorius Control, newly viable thanks to the banning of Field of the Dead.

The list uses its namesake card – Hardened Scales – to plonk absurd amounts of counters onto its creatures. Typically, these creatures also benefit from having these counters, like Walking Ballista, Hangarback Walker or Arcbound Ravager. There are support cards like Animation Module and Throne of Geth, and even weird lands like Llanowar Reborn to continue the counter theme.

Due to a lack of fetches and an abundance of weird, narrow cards, this deck is on the cheaper end of the Modern spectrum. It’s not the cheapest deck in the format, with cards such as Inkmoth Nexus, The Ozolith and Walking Ballista, but it still comes in at a lot less than your three-color fetch/shock deck.

While Fernandez Torres’ deck was mono-green, lists these days tend to splash a second color. This has led to some pretty interesting builds, such as this one splashing white:

The white cards seem very well-chosen: Gaddock Teeg excels against Azorius Control while Leyline of Sanctity makes it very difficult indeed for Burn to close out a game (particularly if you have resilient blockers such as Hangarback Walker). Deafening Silence is great against Blitz, and the main deck Path to Exile is just always a solid choice in Modern, given how powerful and cheap many of the format’s creatures are.

Some lists dip into red, for cards like Lightning Bolt – understandable, it’s one of the best cards in the format – and Kazuul’s Fury, which can close out a game through a stalled board by sacrificing a monstrous Hangarback Walker for damage.

Some of the red sideboard cards seem truly excellent – Whipflare in a deck filled with artifact creatures, for example, or Boil against blue-based control. I’m a little concerned about Blood Moon with a bunch of utility lands and only two Forests, but I suppose there are matchups in which it can really shine.

The version that seems to be the most common splashes black, but only in the sideboard. Interactive cards like Thoughtseize and Fatal Push come in post-board, and playing black opens up Lurrus of the Dream-Den as a “free” companion (this list doesn’t play Scrapyard Recombiner). Lurrus does seem pretty potent in this deck, given how much value is obtained from sacrificing little dorks like Arcbound Worker – not to mention when they’ve got a way to destroy your Scales.

However, the list I really wanted to talk about today instead splashes blue – and the splash is for some truly amazing cards. Clearly, the non-green element isn’t essential, given people are splashing literally every single other color and still successfully getting results. Why not try blue then and really start to push the boundaries?

The headline act in this deck is Emry, Lurker of the Loch. If Lurrus is good in a deck like this, what about Emry? She fills your bin with artifacts you can then bring back, only to sacrifice them so you can bring them back next turn, ad infinitum. An Arcbound Worker, Hardened Scales and sac outlet with Emry allows you to steadily pile on +1/+1 counters every single turn, and that’s just where it starts.

Bringing back Walking Ballista or Hangarback Walker – must-answer threats that define the deck – is very powerful, and scales well into the late-game as you draw more lands. While Emry can’t reanimate a Hardened Scales like Lurrus can, she “draws” cards by milling stuff into the bin. Emry is a super sweet inclusion.

But not anywhere near as sweet as the other blue card in this deck: Mirrorweave. Four mana is a lot in Modern, so you have to be guaranteed to get your money’s worth – but Mirrorweave will often win a game on the spot, when used correctly.

Consider: your opponent casts a sweeper, confident they can mop up the few tokens you’ll get from your Hangarback Walker. You Mirrorweave in response, turning all your creatures into Hangarback Walkers, and now they’re dealing with a colossal air force. Or, even better, you have a Walking Ballista without enough counters to burn them for lethal. At instant speed, you can turn all your creatures into Walking Ballistae, and chuck all the +1/+1 counters on them right at the opponent’s dome.

Let’s talk budget, however. This deck is relatively inexpensive, but still above the price line we’re looking at on this column. What changes can we make?

Unfortunately, not too many. Three of the five most expensive cards are absolutely indispensable to the deck, and cutting the other two will hurt, as well. There’s no point playing the list without Hangarback Walker, Walking Ballista or Arcbound Ravager, and both The Ozolith and Inkmoth Nexus are pretty essential. 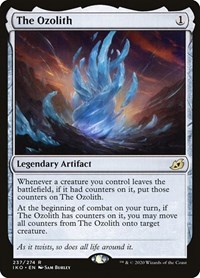 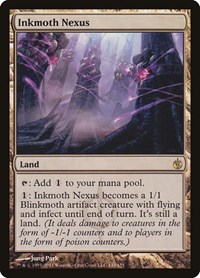 Some lists cut down on copies of The Ozolith – it is legendary, after all – but it’s still a key piece of technology in this deck and the list is worse off without it. Inkmoth Nexus is pretty crucial as well, as it offers tremendous one-shot potential. Sometimes your only path to victory is to swing with a Nexus, sacrifice your board to an Arcbound Ravager, and put all the counters on the Nexus for a lethal poison attack. 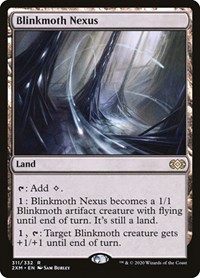 Blinkmoth Nexus is precisely half as good in situations like this. You might still be able to one-shot them, but you’ll usually need more than nine counters on it. Then again, it’s not impossible to chip away at their life total before finishing things off with a Nexus, so it might not actually be half as good – it might be closer to, say, 60 or 70 percent. Still, it’s going to hurt, even if Blinkmoth Nexus is half the price of Inkmoth Nexus.

Often on Modern on a Shoestring I’ll chip away at a deck and make what I consider to be reasonable sacrifices on power level to get some savings on the deck’s overall price. While this deck does, as I say, come in at a relatively low cost with Modern, I don’t really know that there are feasible cuts that could be made to the list for the sake of budget.

I wish there were some cuts to make – this deck is fast, streamlined and its flex slots offer a fair bit of customizability – but to be quite honest, I feel that attempting to make substitutions to lower the price tag will undercut the deck’s performance to an unacceptable degree. I guess we’ll just have to settle for this deck being budget-ish.