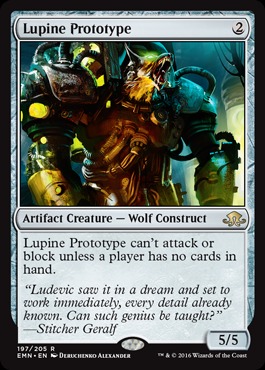 Lupine Prototype is another Eldritch Moon card that caught my attention, and it will join a select group of cards. In the history of the game before Eldritch Moon, there were only five 2-drop creatures with 5-or-more power. 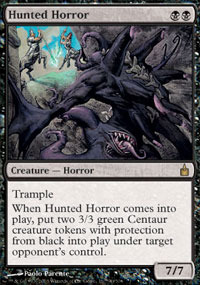 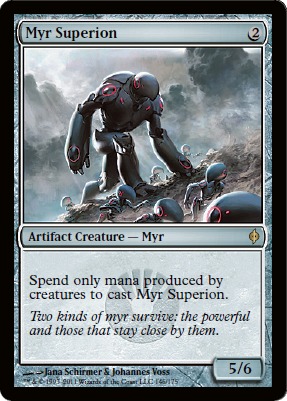 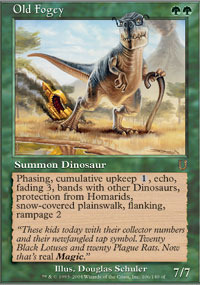 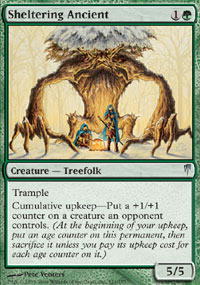 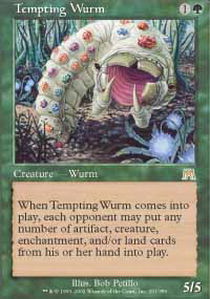 Compared to all of them, the drawback on Lupine Prototype doesn’t appear to be as drastic. At least, if you have the right deck. And with “right deck” I of course mean Modern Affinity. Several people have already asked me what I think about Lupine Prototype in Affinity, so let’s just simulate the hell out of it.

How reliable of an attacker is it?

Let’s start with a traditional Affinity deck, where I replaced Steel Overseer with Lupine Prototype. I’m not happy to cut Steel Overseer, but if you want to add 4 copies of one 2-drop, then you have to cut another 2-drop for curve purposes.

I should have added a singleton Thoughtcast so that I could rightfully call the deck Affinity, but that would greatly complicate the required programming. For the above deck, I built a simulation to goldfish 10 million games of Magic for me. I made a number of assumptions, such as that any hand with 0, 1, 6, or 7 mana sources was a mulligan and that a turn played out according to the following logic:

At the end of turn 4, my program checked if I had Lupine Prototype on the battlefield and, if so, whether or not I were hellbent. Conditioning on games with Lupine Prototype in this fashion, I got the turn-4 hellbent percentage. I then did the same for several other turns. The results are as follows:

This is higher than I expected, which made me wonder if I coded something incorrectly, but I didn’t find any error in the few test games I ran. Even then, Lupine Prototype was not a reliable attacker in the early game. It could also be a “win more” card because being hellbent early might imply that you got a perfect Mox Opal plus Springleaf Drum draw, in which case you were probably winning anyway.

That said, if you are goldfishing against a turn-4 combo deck, then the probabilities for turn 3 and 4 are most relevant, and one way to interpret them is to say that Lupine Prototype is akin to a 2-power or 3-power creature for 2 mana. That is probably worse than Steel Overseer.

And if you’re up against a midrange deck like Jund where games go long, then you may have 5/5 with no drawback that dodges Lightning Bolt, but by turn 5-6 it can be rapidly outclassed by a 6-toughness Tarmogoyf or Scavenging Ooze. Evasion is a centerpiece of the current Affinity strategy, and Lupine Prototype just runs into every possible blocker on the ground while your Vault Skirges and Blinkmoth Nexuses are calling for support. So I’m not convinced yet.

But maybe if you consider a different build of the deck, then Lupine Prototype could work. Specifically, if you cut the 3-drops and the colored spells for cheap ground attackers, then you may achieve hellbent more consistently and overwhelm ground blockers more easily. What I’m talking about is replacing Etched Champion and Galvanic Blast with Frogmite and Myr Enforcer.

There should probably be a fourth Memnite in here, but this is the list that I used for another simulation. Compared to the previous simulation, the Galvanic Blast part was replaced by a “throw your Frogmites and Myr Enforcers onto the battlefield” routine. With that, I determined the following probabilities.

That’s a marked improvement. Even if you only expect the game to last for 4 turns, Lupine Prototype becomes closer to a 3/3 or 4/4 vanilla for 2 mana, which is getting into the range where it may surpass Steel Overseer. And your opponent may have a 5/6 Tarmogoyf, but it can’t both block Lupine Prototype and Myr Enforcer at the same time, making Lupine Prototype a potentially useful addition to a deck like this. The question remains whether a Frogmites/Myr Enforcers build is good in the first place.

All things considered, I remain skeptical about Lupine Prototype in traditional Affinity, but I could see robotic howls happening in adjusted builds of the deck. I’ll see what the future holds.

Check back next week for the analysis of Liliana and other cards that may have an impact on Standard!