I remember making a Legacy video about Mono-Red Storm three years ago and it was a blast! Recently, Legacy Mono-Red Storm got a bunch new toys and netted Martin Medmitten a Top 8 finish in the most recent Legacy Challenge! 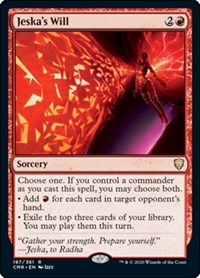 Birgi, God of Storytelling is both an an enabler and a payoff in this deck, since you can use its God side to ramp up mana the turn you’re going off as a Goblin Electromancer. Alternatively, you can cast Harnfel, Horn of Bounty if you have lots of mana and need an engine to go off with. This is replacing Bonus Round from my previous version.

Jeska’s Will is a Commander special and you can use it here either to get lots of mana if your opponent has a full grip or as an Act on Impulse, which used to get played in the deck already.

Ignite the Future is another updated version of Act on Impulse. You can abuse its flashback by discarding it with Reforge the Soul or Harnfel, Horn of Bounty, although you can always just cast it normally first. 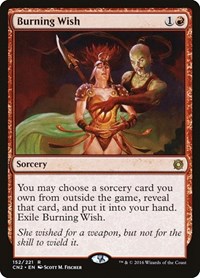 The core of the deck is the same as it was previously, ramping up mana with your powerful banned-in-Modern Rituals – Rite of Flame and Seething Song – as well as some cute other ways like Ruby Medallion and Ancient Tomb.

Your win condition is coming from the sideboard in the form of Tendrils of Agony, which you’ll get access to by using Burning Wish and spending mana of any color from Lion’s Eye Diamond and Manamorphose.

I’m making a habit of using these deck highlights to find great ideas for my next Legacy video, so expect one in the near future!