Sometimes you just want to look at your opening hand and go “Yeah, this is good enough.” That’s the feeling I got while playing the deck I’m featuring today. I first encountered the deck through Pauper content creator deluxeicoff. They tend to build decks that play to extremes, either winning early or grinding the game out to an inevitable end. This build, which I took from the April 3rd Pauper Challenge, is extremely aggressive but has the advantage of being able to refuel thanks to four copies of Of One Mind and four copies of Thoughtcast.

4
Of One Mind
4
Thoughtcast

Brute Squad is an extremely low-to-the-ground aggressive deck. Ideally, you present a threat on turn one and then two more on the second turn, rounding things out with more threats or card draw on the third turn. While you can win protracted games against other aggressive decks or midrange strategies, you have to move at lightning speed to get under the control decks in the format (read: Flicker Tron). The deck works thanks to the bevy of cheap threats, Springleaf Drum and the power of eight cheap card draw spells. 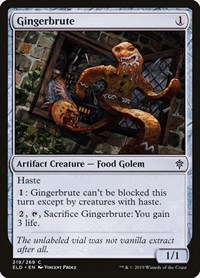 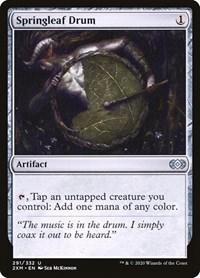 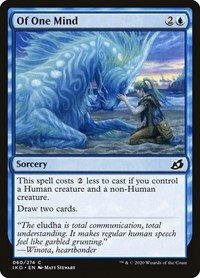 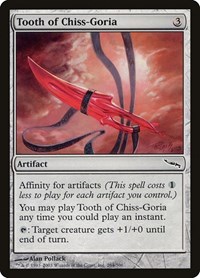 The early game with Brute Squad is all about developing your board and mana at the same time. In most cases, you’ll want to lead on a one-drop creature, with Gingerbrute being the best option blind since your entire game plan is about beating down.

You can lead on Springleaf Drum in a few cases, notably if there are no one-drops you can cast or if leading on Drum will give you access to a more explosive second turn with Of One Mind. After that, you want to be attacking and pressuring your opponent’s life total. Sneaking in damage early is key and if you can flash in a Tooth of Chiss-Goria, you absolutely should to ensure you’re eking out every last point. 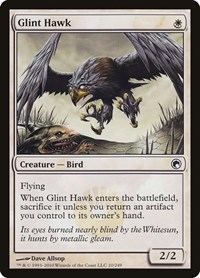 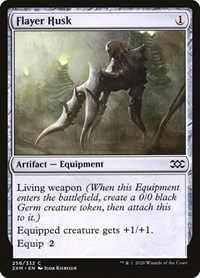 There are a couple of key interactions to note when piloting this deck. First is that with a Tooth of Chiss-Goria on the battlefield, Glint Hawk can represent an additional point of damage by using the Tooth, picking it up and recasting it. Hawk also comes in handy against Chainer’s Edict by resetting Flayer Husk.

Gingerbrute is a key threat here as well. The Food Golem will deal a few points early and then can pick up Equipment or Tooth late and send in thanks to its ability to go unblocked. I often find that leaving Gingerbrute back in the midgame against other aggressive strategies is the correct play as it can absorb a blow and gain you some much needed life. 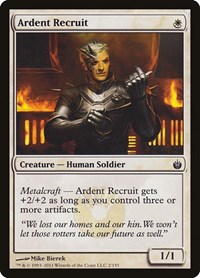 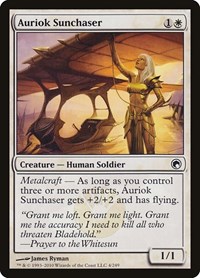 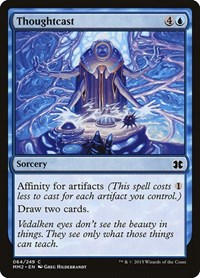 Ardent Recruit and Auriok Sunchaser are just good threats. You never want to expose them without metalcraft. Once they’re both online, they can easily chunk your opponent’s life total and carry Flayer Husk rather well. Both of these are Humans, which matters when trying to chain together draw spells.

It’s the draw spells that kick this deck’s power level up a notch or two. Thoughtcast sees plenty of play in Affinity decks but outside of those builds, it can be a struggle to reduce the cost enough to make it viable. Of One Mind has caught on as of late but the deck building restriction makes it a bit tougher to include.

Brute Squad runs the right number of artifacts and the right mix of creatures to turn both of these into one mana Divinations. The density of these spells means that it’s fairly easy to chain them together. Thanks to the deck’s low curve, you can then easily turn those extra cards into board presence and end the game shortly thereafter. 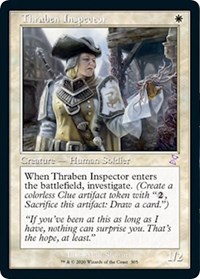 You want to keep opening hands that can play out at least two threats by the second turn of the game. Ideally, you’ll have either a draw spell or a Thraben Inspector as well. Following that, you want either a Springleaf Drum or a Survivors’ Encampment, as you really want to cast your spells. If you only have a Seat of the Synod and no Springleaf Drum, it’s probably a hand you want to send back.

Speaking of mulligans, Brute Squad goes to six exceptionally well. The deck is hyper redundant and given the density of redraw effects, you can pretty easily go to six and expect to end up not falling too far behind. I would avoid going to five cards if at all possible, since that’s where the card deficit starts to catch up to you.

Brute Squad is not a deck that can let its game plan develop over the first few turns of the game. Rather, it wants an opening hand that can apply pressure and refuel if needed. That being said, I would keep a hand of all creatures but not one that had only one threat and three card draw spells (unless I knew I was in a war of attrition).

Brute Squad tends to do well in matchups where it can present an abundance of threats early and turn them sideways with reckless abandon. Even if the face of blockers like Augur of Bolas, Brute Squad can go wide enough to render a single blocker useless. It struggles against decks that pack plenty of main deck answers (hello, Fiery Cannonade and Suffocating Fumes) or decks that can complete negate combat (Flicker Tron). I have also found the deck to struggle against other hyperlinear decks as you do not have enough interaction to disrupt their game plans. 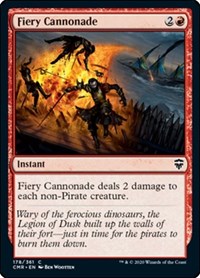 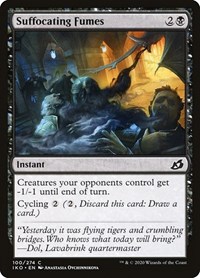 Against other aggressive strategies, you need to correctly identify your role in a given moment. You should almost always apply pressure first, but be ready to keep back your 3/3s as blockers if the need arises. Larger threats tend to be better here and moving around Flayer Husk can be a lifesaver.

When squared up against midrange, you just want to slam your creatures. Brute Squad can present enough threats that the one-for-one removal midrange decks tend to run these days can’t keep up. The most important thing to remember here is to play around sweepers and keeping creatures around by boosting their toughness to three.

Control is easy until it isn’t. Most control decks in Pauper will struggle with three threats on turn three. The problem with Brute Squad is that its threats are relatively small. As such, if control decks survive to the fifth turn, it can be very hard for you to close the game out. This is where the sideboard burn comes in handy as Galvanic Blast is exceptional at closing out games.

Out: 2 Journey to Nowhere, 2 Ornithopter

In: 1 Journey to Nowhere, 1 Dispel

Out: 2 Journey to Nowhere, 2 Ornithopter, 1 Thoughtcast

Out: 2 Ornithopter, 1 Tooth of Chiss-Goria

Out: 2 Ornithopter, 1 Tooth of Chiss-Goria

Out: 2 Journey to Nowhere

Out: 1 Dispel, 2 Journey to Nowhere, 2 Ornithopter, 1 Tooth of Chiss-Goria

Out: 1 Dispel, 2 Ornithopter, 1 Tooth of Chiss-Goria

Out: 1 Dispel, 2 Journey to Nowhere