Every now and then, when I’m working on a deck, I find myself certain that a commander is just the newest flavor of a long line of other, better options, only to find that it’s surprisingly not the case. Perhaps as someone that kept running into the deck back in Modern, Black-White Tokens just seemed like it would be a much more common occurrence to me. However, there aren’t nearly as many Orhzov token commanders as I had thought. Abzan seems to overtake it, but I’m a simple man. The fewer colors, the better. So this week, I’m taking a look at a deck I put together for a stream a month or so back, and that has now been tweaked and adopted by my wife: Thalisse, Reverent Medium. 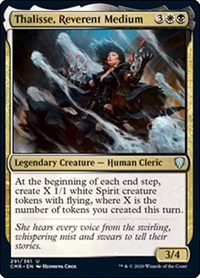 On the surface, Thalisse struck me as a bit win-more, only paying you by doing more of what you’re already doing. A second look, and a reminder that she triggers off all tokens, not just creature tokens, bumped her up in my estimation.

For the low cost of making tokens, you get to double up on what you made every single turn, which can quickly lead to a large resource disparity. It’s not nearly as explosive as something like Rhys the Redeemed, but trading green for black opens up more options for removal and attrition. A key point to always remember: Thalisse triggers at the beginning of the end step, so it’s best practice to do as much as you can during the second main or in response to her trigger.

The need for continual token production does mean that the deck list skews very heavy on token makers, so much so that the payoff cards are frequently pulling double duty as either another way to make tokens, provide card advantage, protect your threats or more.

The majority of payoff cards end up being lords, in part due to this, buffing some or all of your tokens to overwhelm your opponents in the skies. Other top-end cards tend to be too narrow, taking up valuable real estate in the list that could be better served by a marginally worse card that serves more than one purpose. Sometimes, synergy is everything. 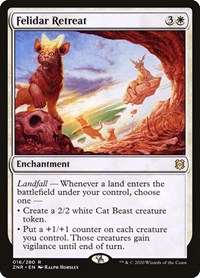 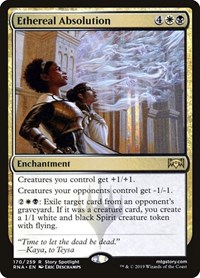 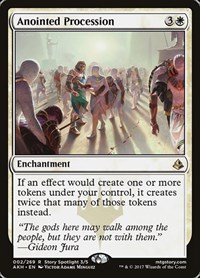 To that end, repeatable token production is the number one priority. Without it, it’s far too easy for Thalisse to go from a steady value engine to a vanilla five-mana 3/4. Options that require an upfront investment without further mana sunk into them later are ideal, so your mana can still be put toward developing your board or hand in other ways while Thalisse does her thing.

Felidar Retreat and Emeria Angel are solid choices for this, alongside stalwarts in Thraben Doomsayer and Gideon, Ally of Zendikar. Already, three of these exemplify that hunt for flexibility to varying degrees. Thraben Doomsayer is rarely a lord, but if you’re like me, the one time you get to care about his second ability you’ll end up cackling.

In a similar vein, Ethereal Absolution is expensive, but the effect it has is well worth it. A buff for your team, a mini-wipe for the rest of the table and costly-but-repeatable graveyard hate that can incidentally spit out tokens for Thalisse? Sign me up! Legion’s Landing and Castle Ardenvale are narrower but offer their own benefits in either cheap cost or low opportunity cost, and Hidden Stockpile can fix the top of your deck and accrue incremental bits of advantage through a game.

This being a token deck, Anointed Procession is more than just an obvious include. Procession goes into overdrive with Thalisse, doubling the tokens you make each turn, and then in turn doubling the Spirits made with her trigger at the end. A single token made results in four 1/1 flyers! 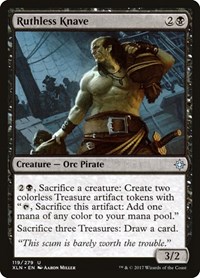 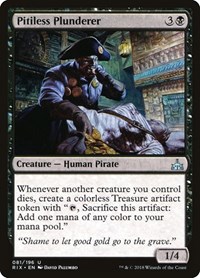 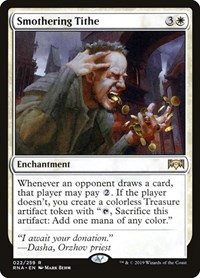 Thalisse doesn’t just care about creature tokens, though. She checks for any type of token made, so I did try and include as many ways to play around with that as possible. The options weren’t too wide, but one type of token that had a solid suite of offerings were Treasures.

Being black-white, the options for ramp are limited, and this deck especially can end up being very mana-hungry with some draws. Pitiless Plunderer shows up in black decks of all sorts these days, and for good reason. Here, any creature dying, token or otherwise, nets a Treasure, which in turn creates a Spirit.

Ruthless Knave is more mana intensive, but offers an extra outlet for your Treasure if necessary, as well as becoming absurd with an Anointed Procession in play. The first time you turn four spirits into 24 while gaining mana, you’ll feel like you got away with something.

Rounding it out, while I personally eschew Rhystic Study, Smothering Tithe and the like in my lists both for fun and book-keeping reasons, Smothering Tithe is just too good with Thalisse to pass up. Checking every turn and really turning the screws on whether your opponents are willing to pay or not is huge. 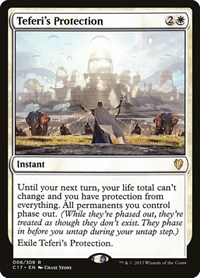 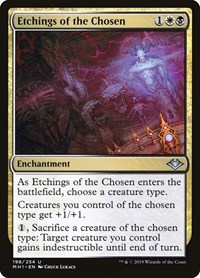 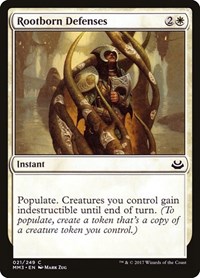 Thalisse is a bit expensive, though at least more resilient than the five-mana 2/2’s I’m usually palling around with. That said, keeping her on board as long as possible is key to this deck’s success.

One-shot effects in Teferi’s Protection and Rootborn Defenses have surprise on their side and can be easily held up or disguised if one of your many mana sinks is on the board. Rootborn Defenses can even help bump up your board a bit, though outside one possibility, populate is not at its best in this deck.

Etchings of the Chosen (name Spirit, just… pretty much always name Spirit) has been a sleeper MVP in this list, upping the threat of Thalisse’s flyers while also allowing you to use them to keep key creatures around almost indefinitely. 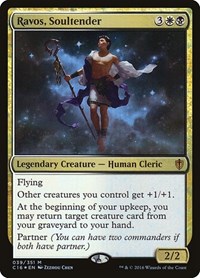 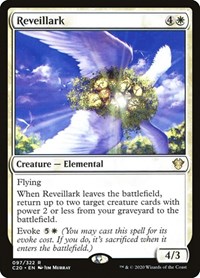 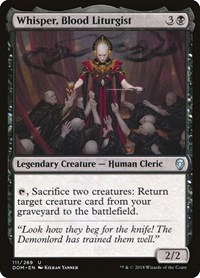 You aren’t always able to keep creatures around, so digging up the bodies for reuse is necessary sometimes.

Ravos, Soultender (there’s my expensive 2/2!) incrementally Raise Deads for you while offering a blanket buff to the team.

Reveillark doesn’t play much into the token plan, but the power is certainly there, and it can bring back a large chunk of the deck’s key creatures. Whisper, Blood Liturgist, on the other hand, can reanimate any of them, and with Thalisse around, fuel for Whisper’s ability is typically abundant. 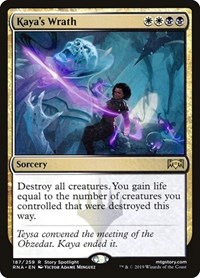 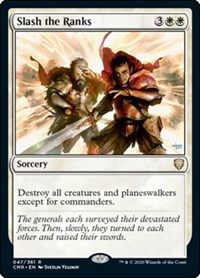 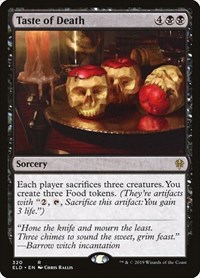 Sometimes though, that abundance isn’t enough and resetting the board is the best option.

Kaya’s Wrath is a bit color-intensive, but on-theme and it can give you a nice life bump.

The ideal, though, are wraths that leave behind Thalisse to keep you from commander-taxing your way out of the game. Slash the Ranks leaves behind all commanders, which can be a problem if a Voltron is staring you down, but generally it’s not too bad. Hitting planeswalkers is a nice bonus, too.

Taste of Death is getting tested, but three creatures can be a lot for your opponents, and the Food will remake three bodies for you as long as Thalisse sticks around. Magister of Worth also pops in as a potential wrath or reanimation spell, and while it’s not the perfect card, a key note is that this list is very specifically tailored to my own playgroup and the more casual power level that they prefer. 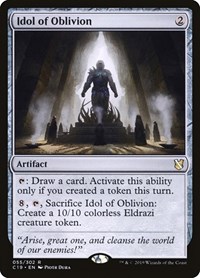 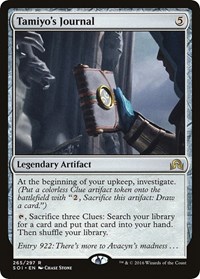 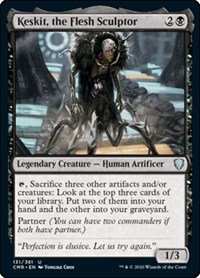 While white has a problem with card advantage in Commander, the addition of black and a look into the theme of the deck opens up some solid options.

Idol of Oblivion is fantastic, coming down early, able to steadily trigger very easily in the list and even offering a mana sink and a hefty token if push comes to shove.

Tamiyo’s Journal, on the other hand, spits out a steady supply of Clue tokens, triggering Thalisse and offering the option of card draw now or waiting a few turns for a tutor instead.

Then, in part because I’m just a sucker for sacrificing creatures, Keskit, the Flesh Sculptor makes an appearance, happy to chew up extra tokens of any variety to dig through your deck three cards at a time. On top of those, planeswalkers in general offer a solid source of card advantage in their own right, with Tevesh Szat, Doom of Fools and Liliana, Dreadhorde General drawing actual cards to the virtual advantage that Kaya the Inexorable offers. Of course, all of them making tokens in some form or another just is gravy on top. 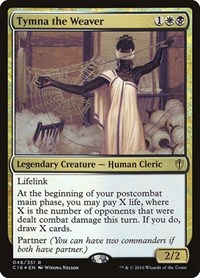 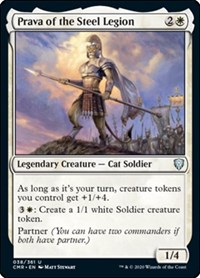 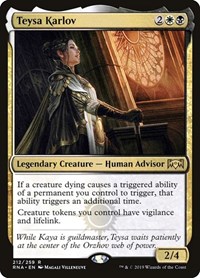 While the deck is built around Thalisse first and foremost, an accidental feature of the construction is that this deck is by far the one with the most alternate commander options that I’ve ever built.

Discounting playing either Tymna the Weaver or Ravos alone, there are five different partner pairings that could all hang out in the command zone, with Keskit being the one that makes the least sense.

On top of that, Teysa Karlov and Elenda, the Dusk Rose both could pull their weight. While the deck loses a bit of the punch from not having all of the synergies at 100 percent, they’re reasonable enough that making the swap for a game could be a fun way to spice up a round, and it’s something I might try to do a bit more of in the future.

If you’re itching to just make a few piles of little tokens and send them hurling at your opponents, but you just aren’t feeling very green lately, Thalisse is a fun option with a bit of a different approach to the game. There’s a few hints in the list at other directions you could focus on, potentially doubling down on the aristocrat effects, or using her to fuel some life gain shenanigans in an offbeat way.

Even better, some of the cards that’ll almost always make the cut are getting new old-border treatment in Time Spiral Remastered! Be sure to pick some up for the upcoming launch party! Until then, have fun respecting the dead, having a lovely little chat with them and maybe having them swing in for an alpha strike or two.