I’ve been on a budget deck kick recently, and I think that’s helping me explore the new commanders from Kaldheim. Truth be told, they haven’t been as exciting to me as I’d hoped, but a budget deck always piques my interest thanks to the associated restriction and the minigame of building the deck without exceeding that restriction.

Today I’ll be exploring one of the stranger commanders available in Kaldheim – Fynn, the Fangbearer. Fynn is the only card in this set that specifically references poison counters. This isn’t a reference to any kind of Phyrexian connection via Vorinclex, Monstrous Raider – instead, the story is that Fynn stabbed Koma, Cosmos Serpent, which was a world-first achievement, and his reward was that, when Koma’s poisonous blood got all over him, his blood was turned poisonous as well. I guess somehow he passes this trait on to other deathtouchers through some sort of terrifying transfusion.

As a mechanic, poison has a bit of a spotty history in Commander thanks to cards like Skithiryx, the Blight Dragon – after all, with a doubled starting life total, some people find it a bit strange to be taken down by ten poison counters just as they would be in a regular one-on-one game.

With that in mind, I thought Fynn would be the perfect subject for a budget article, where I’d be unable to shore up the commander’s weaknesses too much (regular readers will know I prefer decks to have a bit of a glowing weak point – I guess I played too much Metal Gear Solid.) Due to this and the contentious nature of poison in general, I’ve chosen to leave all infect and proliferate cards out of this deck – that way, this deck will have to win on honest terms and avoid victories that feel unearned. Want to stop this deck from doing its thing? Kill Fynn.

I’ll also be aiming to keep this deck’s curve low, as that’s something I’ve been experimenting with and intrigued by over the last few months. Don’t get me wrong, I love an eight-mana do-nothing as much as any other social Commander player, but sometimes it’s interesting to experiment with extremes and see what lessons we can learn.

If I’m avoiding infect and proliferate, this deck will need to be full of choice deathtouch creatures, and I’ve amassed twenty of my favorites.

Small deathtouch creatures are interesting because blocking them can often feel awful, and I’m counting on some of that tension to help put some poison counters on opponents. These are all one mana 1/1 deathtouchers, with Gnarlwood Dryad the only one that could potentially grow.

We begin to move into the two-drops here (why does Heir of the Wilds have deathtouch anyway?) and see that they’re not that much different or better than the cheaper options. Wasteland Viper’s bloodrush ability makes it secretly one of the trickiest cards in the list.

I’ve come up to some of the more awkward cards in the list – Narnam Cobra requires a payment while Nightshade Peddler has to have a friend. At least the Peddler can provide one of the (very few) non-deathtouching creatures with an upgrade. And yes, Venom Sliver is the only Sliver – that’s how much I wanted a two-mana 1/1 deathtoucher. Budget decks are tough!

I wish I could say I’d found room for a morph subtheme to support Deathmist Raptor, but alas, it’s simply a 3/3 deathtoucher for three with an expensive upgrade path. Skullwinder was the first card I put in this deck list, as it’s a great way to recur another deathtoucher while also playing one.

Now we get into the more expensive section. Oakhame Adversary plays on that tension I mentioned earlier, or at least it would if opponents weren’t already so incentivized to block. Hornet Queen may be this deck’s biggest haymaker, at least with Fynn around.

Instead of sticking strictly to a creature/noncreature/land paradigm for categorization today, as I often do, I’ve blocked out categories of cards by functionality, with the above deathtouchers being the first of those categories. Let’s talk about some ways you can augment these deathtouchers!

First strike and double strike make your deathtouchers significantly more powerful, hence the first the pieces of Equipment on this list. That said, Grappling Hook is quite costly, requiring a full eight mana before it first makes an impact, but I think that impact is pretty serious. Viridian Longbow is a fairly obvious combo with our deathtouchers, turning them into assassins of the highest caliber. We’ve got some more equipment here, but I’ve placed these in the “evasion” category. Cliffhaven Kitesail is just Neurok Hoversail with a snap-on clause, so that justifies the additional equip cost compared to Cobbled Wings. Either of these serves as a solid reusable way to sneak deathtouchers across enemy lines.

We’ve got some more diverse options here. Evolution Charm has three modes that could be relevant in this deck, though the land-finding one is only worthy in a pinch. Key to the City plays double duty between filtering and evasion, while Predatory Focus and Runed Arch are great single turn all-out effects that enable alpha strikes. Finally, a classic. Rogue’s Passage may be costly to use, but I foresee situations where you’ll be looking for somewhere to put excess mana. There are many ways to sneak creatures past defenses, and one is to turn a single creature into a sacrificial lamb. I suggest using one of your deathtouchers that has more power so that you can take out as many defenders as possible – that is, of course, unless you’re simply on track to finish someone off.

That’s a wide-ranging look at the enablers – let’s see what’s here to support that plan.

You may not be able to spend on something like Glimpse of Nature, but Beast Whisperer is a fantastic facsimile. I couldn’t justify the monetary cost of Guardian Project or the mana cost of Soul of the Harvest to go along with it, but that’s where Lifecrafter’s Bestiary shines. Harmonize is a great way to refill and Keeper of Fables keeps cards flowing as long as you’re getting into the red zone – and if you’re not, what are you doing? Don’t forget, Fynn’s a Human – if you have trouble remembering, hum the Adventure Time theme to yourself. You need some amount of graveyard hate, because everyone is doing something recursive. Loaming Shaman and Tormod’s Crypt both let you target opposing graveyards without endangering your own. 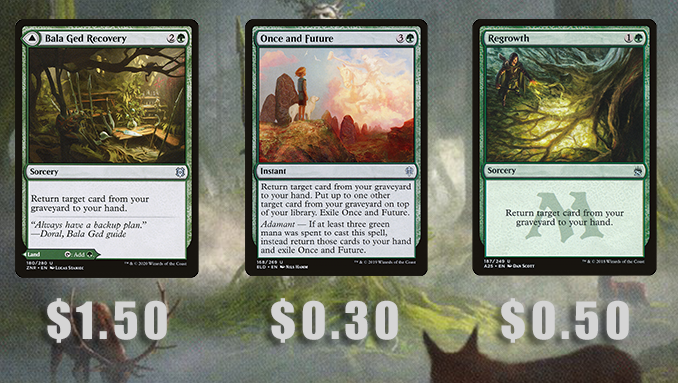 Yes, you do have a few reasons to want your own graveyard intact. 20 deathtouchers feels like a lot, but when you look at how fragile they are, you’ll understand why this green deck needs to go green and reuse those cards. Bala Ged Recovery is a card I expect to see in green decks for years to come, by the way – I’m no finance writer, but I don’t think this card has hit its value ceiling (this is not MTG Finance advice! No stonks here!).

Deathtouch allows us to use cards like these to take down opposing creatures with ease. Halana, Kessig Ranger goes from a great value engine to a factory that makes only Doom Blades and alongside her, you have many more green Doom Blades. Remarkable, isn’t it? I’m not big on two-for-one’ing myself with fight effects, which is why this is the only one you’ll see in this deck. Primal Might lets you outgrow something and then crush it – something the Prey Upons of the world can only dream of. 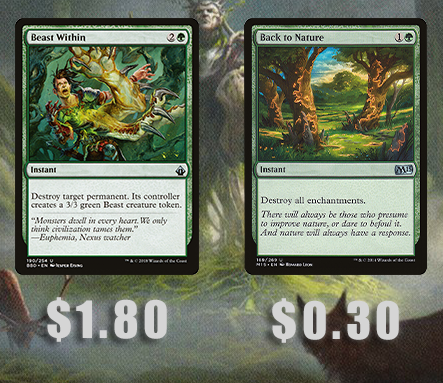 Creatures aren’t the only things that need to be removed. Given that this deck only plays one enchantment (which you’ll see later), I feel confident about Back to Nature’s value, and Beast Within always has something to offer. Nature’s Claim feels a lot better when you don’t care about opposing life totals. The others are just solid budget Disenchant effects! These two defied my attempts at categorization, so you see them together here. Dolmen Gate protects your creatures when they attack, making the blocking equation nigh unsolvable for opponents. Myth Unbound helps shore up one of the deck’s biggest weaknesses – it needs Fynn!

Even a low-curve deck can use some mana rocks, especially ones like Mind Stone that can convert into other resources. The real winners among mana rocks are here, though – Heraldic Banner can help us finish off a wounded opponent when Fynn’s not around and Rhonas’s Monument gives out some trample, helping leverage Fynn’s strengths. I haven’t put a ton of ramp here, which seems odd for mono-green, but again: low curve.

A couple of ways to get rid of opposing nonbasics never go amiss, and the two “ramp” lands here can help you move toward double-spell turns in the late game.

Memorial to Unity can cash in for a creature, while Oran-Rief, the Vastwood sticks around and gives your creatures more power – and importantly, more toughness. The cyclers? They cycle. Low-curve decks love cycling lands.

Hopefully this gives you some ideas about how to build Fynn or another budget deck. At some point I’d love to throw down the gauntlet with some other budget builds, but for now, I leave you with the full deck list. Enjoy!

Fynn, the Fangbearer by Eric Levine
Buy This Deck