As with any TCG, Flesh and Blood competitive decks can often get streamlined to look synonymic of each other. For those of us who saw the Calling Auckland event, we’ll remember the flood of Ira’s coming in, and even now we see a healthy share of Dorinthea dominating the Skirmish season.

Now, the cards making up those competition-level decks are of course great. Cards like Command and Conquer, Enlightened Strike and Sink Below (Red) have all been touted as strong within the current metagame. Often though, it’s a player who finds a unique way to use an old card in these valued decks to excitingly and effectively that can flip the meta over, showing us hidden value where we all thought was naught.

In the spirit of a new set coming soon then, lets look back to the original three sets of Flesh and Blood in a combing back of possible “forgotten value” cards in Welcome to Rathe, Arcane Rising and Crucible of War. 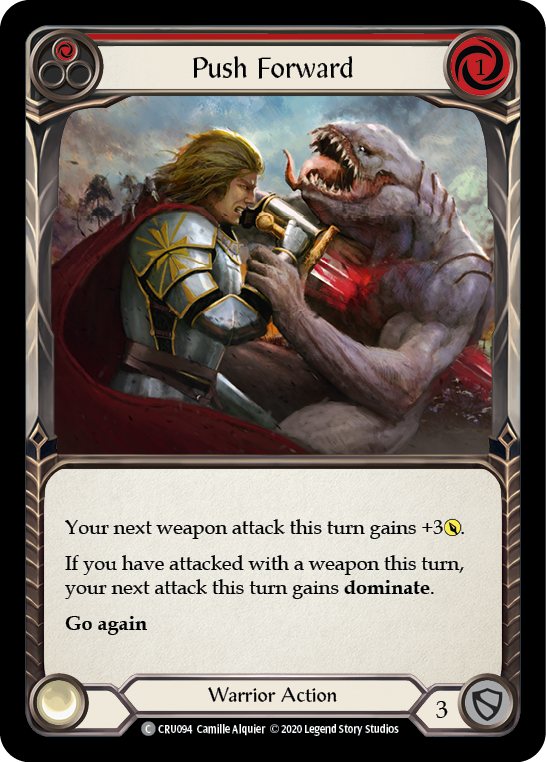 Warrior has a lot of great ways to give +3 with non-attack actions, which is mainly why Push Forward gets pushed back in Warrior.

Since most players are currently playing Dorinthea, this makes relative sense. Most of the time, you wont be getting to the second attack and can’t use the Dominate effect. With Kassai and possibly future Warrior heroes however, Push Forward presents the unique ability to give any attack Dominate, weapon or not.

When playing a Warrior deck in which you almost certainly go-again every turn, Push Forward can be a reliable surprise threat that allows for a strong weapon swing or a powerful attack action, with both getting the Dominate treatment. 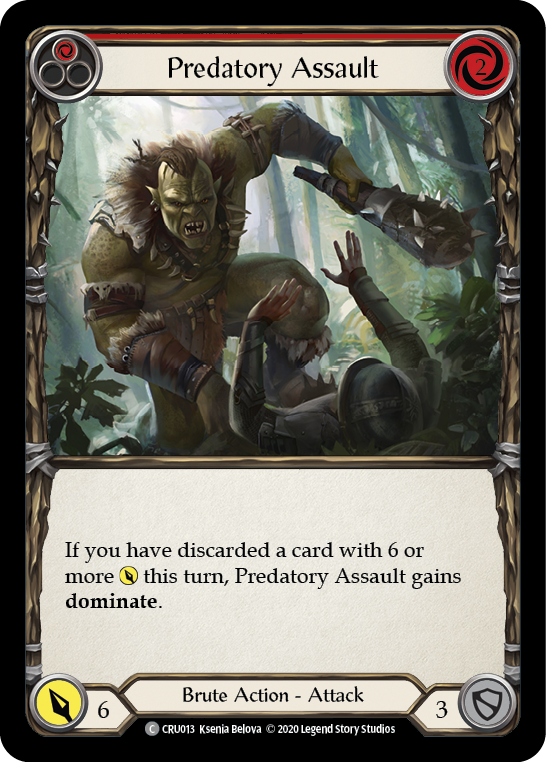 Predatory Assault continues to climb up the ranks as one of my favorite Brute cards. Six attack for two cost with no required discard allows for one of the few solid ways in Brute to attack without the requirement of three cards like Wrecker Romp or Savage Swing.

In addition, combining Intimidate and the conditional Dominate together can result in massive damage. Cards such as Barraging Beatdown (Red) will become an automatic plus +4 when their conditional ability is activated with Dominate, and the Intimidate can further hurt your opponent’s ability to block.

As more and more creative ways to discard for a six-attack card come into play, Predatory Assault becomes stronger and stronger. Pair in the fact that it could potentially double to 12 with Kayo or that it blocks for three and you have a card that could be a sleeper hit in the current meta. 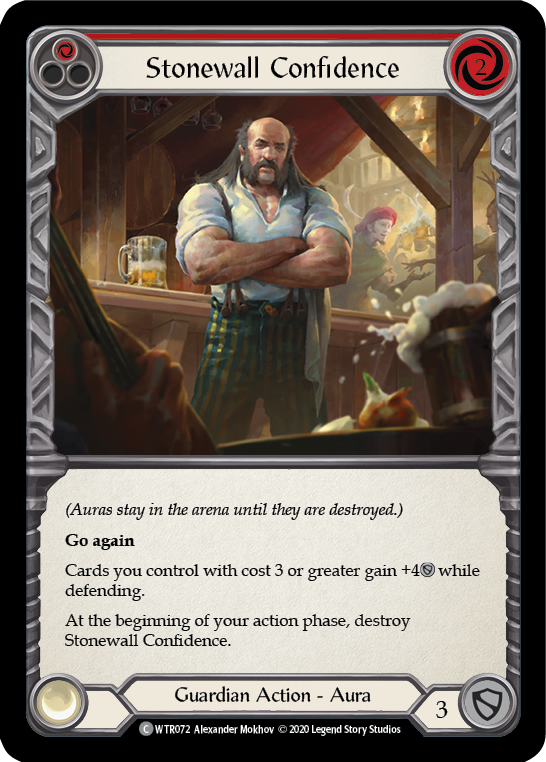 We’ve already seen how good Flic Flak has been in Ira Blitz decks and Stonewall Confidence presents a very similar ability in the context of an aura. Giving +2, or +4 in the case of the red pitch version, essentially gives you card advantage, as you can block up using less resources from hand to the same effect as using many.

As an aura blessed with go-again, SC allows for another attack action or Anothos to be swung after for six. This combination of solid pressure combined with an upgrade to your card’s defensive value the turn after is definitive of a momentum build in Flesh and Blood.

The one weakness of Stonewall Confidence is the cost. Ironically, the card itself doesn’t qualify for its effect, along with a myriad of other pitch-cost effects in Guardian. Due to this, I personally think the Red pitch version of this card is a sleeper hit, especially in Blitz where it can allow you that crucial swing of momentum. 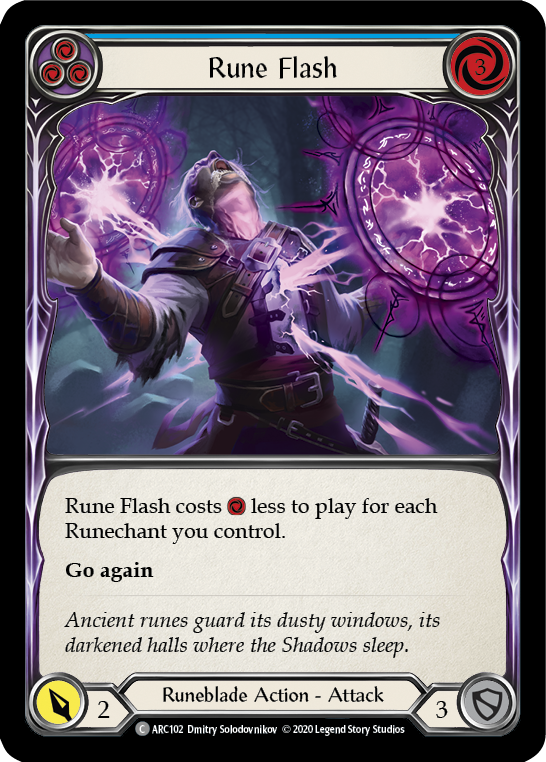 Viserai has a particular difficulty closing out games when stuck below three Runechants. In these cases, you almost have to be attacking every turn to prevent your opponent from closing the game with a full hand themselves. Arknight Ascendancy with Dominate can bail you out, but outside of that, options are scarce.

This is one of the main reasons I like Rune Flash as a blue pitch card in Viserai. In the early game, you’ll be using it for the resources, while in the late game it can become vital in closing out or getting that final bit of momentum to attack twice. At low health totals, your opponent will be forced to block Rune Flash and the Runechants coming with it, along with then a follow up weapon attack and another Runechant, if created. Although this doesn’t have as high a potential as some of the other cards in this list, sometimes it’s the small changes that can have the biggest effect. 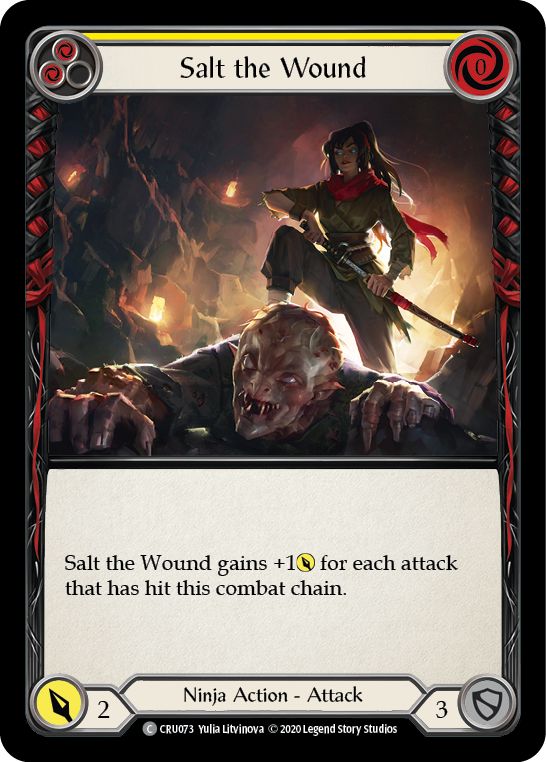 I love cards that allow each Kodachi strike to become even more. Kodachi is already a great weapon, and hits also giving +1 to this attack is a big deal that scales very well with Ira’s theme of ramping up damage along the combat chain. Salt the Wound also plays great in Benji, where a streak of unblockable attacks can be followed up with a hard-hitting Salt the Wound.

Outside of this though, Salt the Wound also has all the characteristics of a great Ninja card. The zero cost applies to many effects, such as the Kodachi’s go-again condition or even Katsu’s discard condition if you choose to run it with him. The card blocks for three as well, making it viable on the defensive side of the game is needed.

Although Ninja seems to be one of the most combed through classes as of now, I feel there’s still a little juice left in the orange with this card. 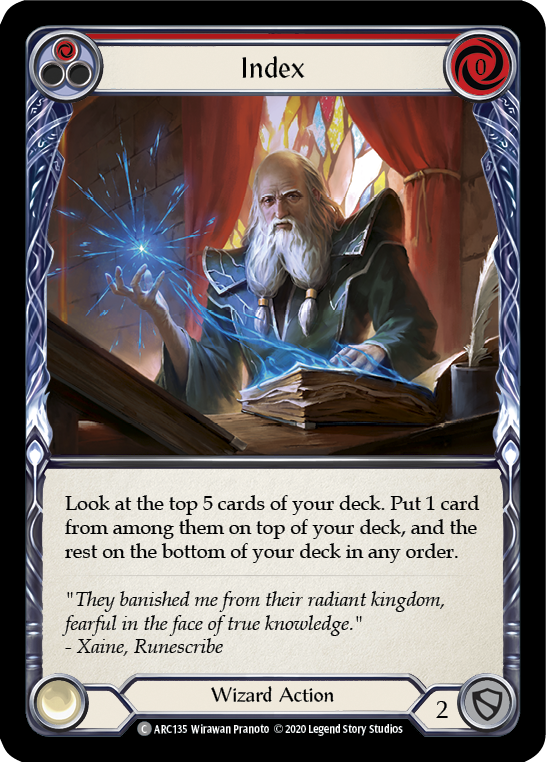 Wizard is a tricky class to master, but most of those venturing into it realize the importance of setting up the bottom of your deck aggressively so that you can end the game without relying on random chance.

Index has a certain elegance in doing just that and it doesn’t require you to sacrifice your current turn. Allowing you to place a card on the top of your deck can be extremely useful to get those all-important Energy Potions out or to continue attacking with valuable midgame cards like Zap (Red), Voltic Bolt (Red) or Aether Spindle (Red).

A big weakness of Index however is that it only blocks for two and it can be a painful to see of the top of your deck on a attacking turn. However, I think this weaknesses are outweighed by the extremely aggressive variant on Opt allowed by it, and the card itself having a wonderful zero cost to play.

Although not very prevalent currently, I have a feeling that as Wizard continues to grow its card base and combination ability, Index is going to find its way into more and more decks. 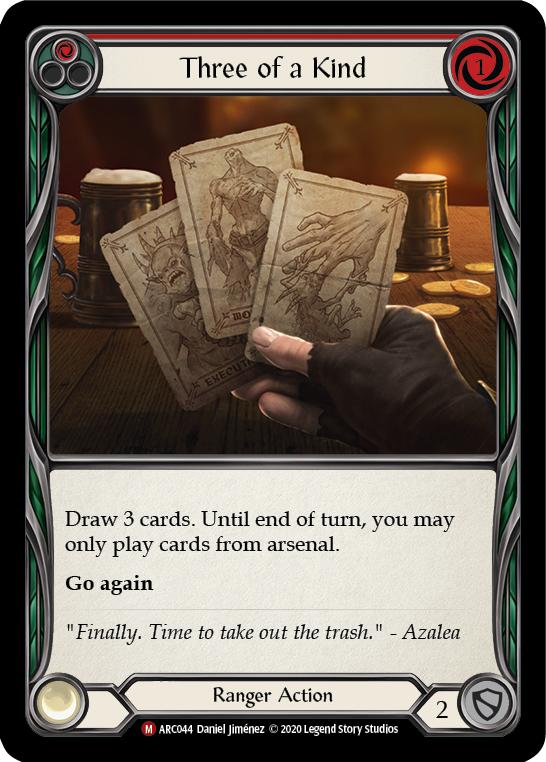 I think for every class, there’s been one Majestic or Super Rare that’s not really stuck to each deck as much as you would expect. For Ranger, that high-rarity card has been Three of a Kind.

In practical play, Three of a Kind is one of those cards with an extremely high ceiling and extremely low floor. Drawing three cards is extremely powerful, but the restriction of having to play everything out of Arsenal is equally limiting.

However, when supported with cards like Rapid Fire, Bull’s Eye Bracers, Pathing Helix (Red) and so forth, Three of a Kind can lead to blowout turns. As we saw in Crucible of War, the release of more Reload cards and various arrows such as Pathing Helix (Red) led to new an exciting way stream the attack out of Arsenal.

I have a strong feeling that as the Ranger player and card base grows, new and creative implementations of Three of a Kind will present them with the ability to completely blow your opponent off the board. 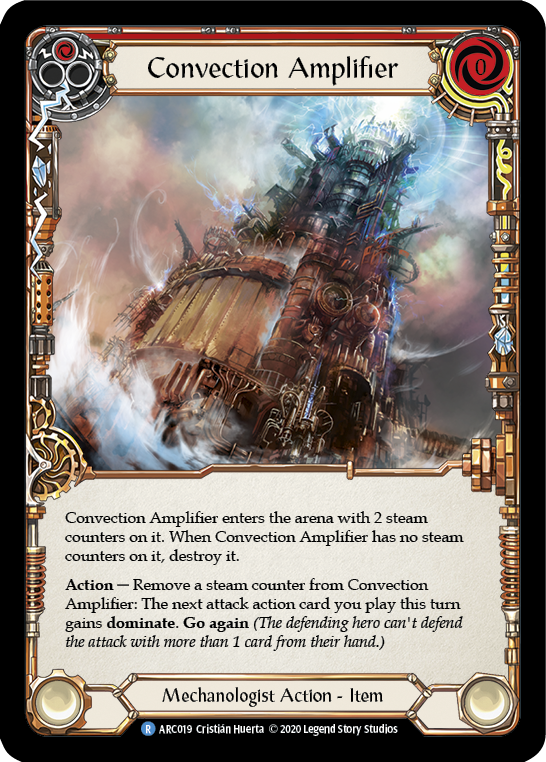 Control Dash is very, very good. However, in terms of the oft considered lesser version in Classic Constructed, Boost Dash, I feel that Convection Amplifier has more to offer for the build.

Think of it as squeezing the last juice out of the lemon, but Boost Dash decks starting out with Convection Amplifier can use it to snowball large amounts of damage on their turns. Due to the extremely aggressive nature of this deck, you almost always want to be playing lots of attacks and connect for them.

Cards such as Pedal to the Metal, High Speed Impact and Combustible Courier all have fantastic on-hit effects, and usually bestow a “boost” to the next attack in the chain if they activate. As such, giving the first attack Dominate can result in the next attack having it and the next one after that and so forth.

Although Hyper Driver or Teklo Core is usually the starting choice for these Boost-based decks, you usually can’t use their full effects until a few turns in, and hence lose out on the ability to be aggressive early. Convection Amplifier forgoes this effect, and although it does have a big handicap having only two uses, the zero cost for the item makes up for that as it’s a breeze to put into play. 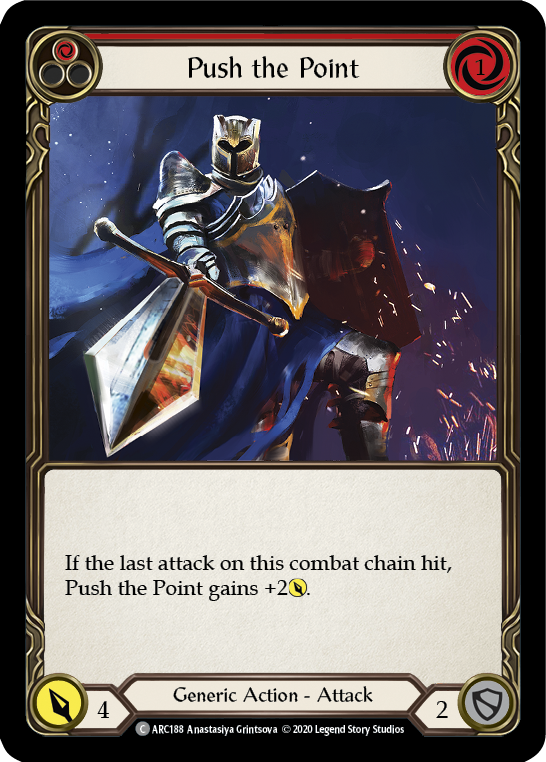 Man, I love this card, and I find there are only a handful of cards in the game which are better to bluff with than Push the Point. I especially love Push the Point in aggressive Ira decks, where a simple connection from a Kodachi can turn out to be six or even seven damage if playing the card on chain link 2.

In addition, it becomes a great target for Snapdragon Scalers or Razor Reflex, being only one cost, making an already threatening card even more so. It gets a little flack for only blocking for two, but the offensive upside here is huge.

Outside of Ninja, variations on Warrior decks can benefit from a big second attack, along with some Ranger decks. Out of the generics that haven’t seen much play, Push the Point tops the charts in untapped offensive value.

See something you like? All these cards haven’t broken into competitive play in a big way yet but they have a lot of potential with the right deck surrounding them.

The nature of a meta is always to have cards shift in and out as new cards take a spotlight, and who knows? With the recent delay of Monarch, maybe there’s enough time for somebody to squeeze in one more surprise before the game completely changes.