Going into the pre-release events, I was pretty excited to see how the new mechanics, particularly the talents, would play out in the Monarch Sealed format and I was not disappointed. So far, this feels like the deepest and most interesting Limited format that we’ve seen so far with specific uses for nearly every card in the set. With that in mind, here’s what stood out for me the most this past weekend.

Overwhelmingly, Light was by far the most played talent across every event I attended, with well over half of the players choosing Light over Shadow.

I’m not particularly surprised by this for a number of reasons. First, the Soul mechanic tends to rely a lot on your opponent letting your attacks hit, putting the onus on your opponent to work out when they should and shouldn’t let you charge your soul and giving them the opportunity to make a mistake. Conversely, the blood debt mechanic relies on you playing your cards correctly or suffering some pretty hefty consequences. This will tend to push newer players and those without much experience with the mechanics to the Light heroes as it’s much more forgiving.

However, the payoffs for playing Shadow are pretty high. Many of the Brute cards are undercosted for their effects and Chane can set up some incredibly powerful turns by utilizing the banish zone. Moving forward, I expect the ratios to balance out a lot more.

Without access to repeatable Arcane Barrier affects like Nullrune armor, arcane damage is significantly more valuable in this set. Spectral Shield tokens exist and the new armor pieces are great against it for a single turn, but generally speaking, blocking arcane damage will cost your opponent an entire card. Because of how difficult it is to block, the value of some other cards which seem fairly subpar on the surface increase, particularly against Chane. 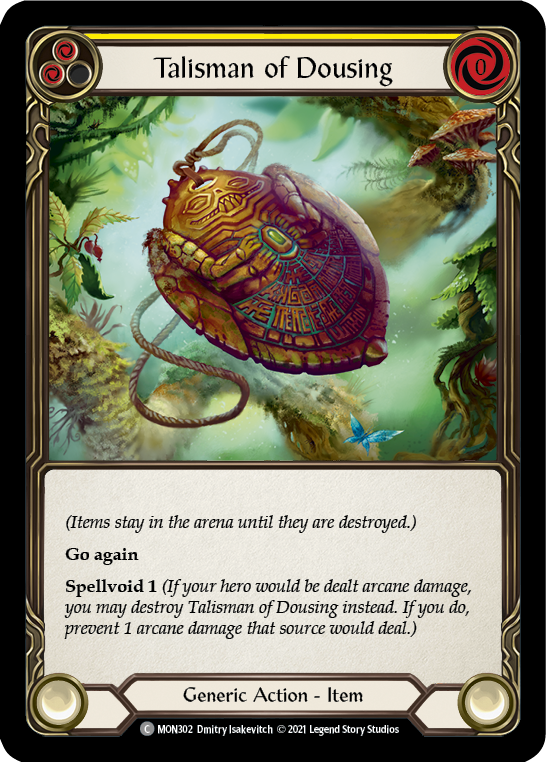 As a yellow item with go again, Talisman of Dousing offers the only generic way to prevent arcane damage on an action and is particularly useful in the late game when you’re on a low life total. Most arcane damage is fairly telegraphed but there are also some instant speed options at higher rarities. 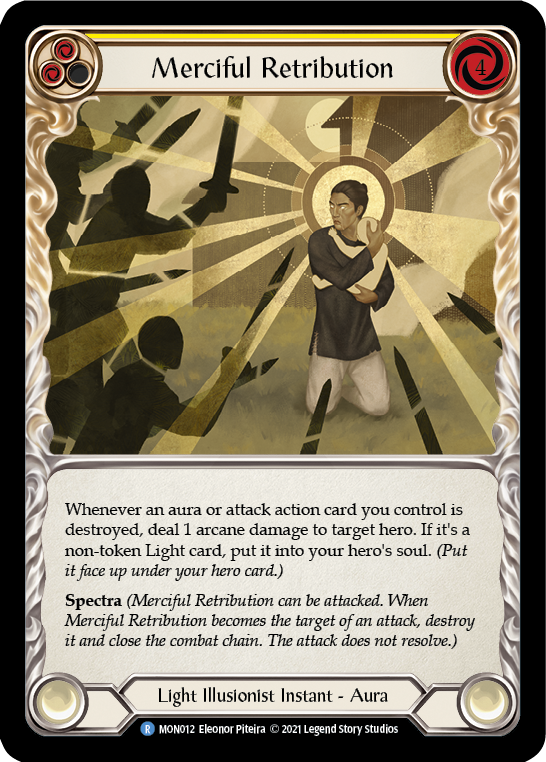 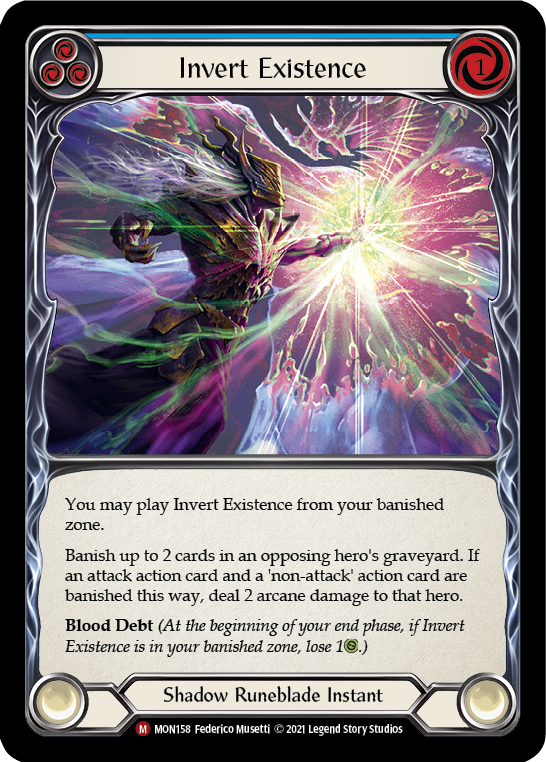 Jason Chung finished off Callum Gittens in the first prerelease on Thursday this way and I expect it wont be the last time someone wins like this. Make sure you keep track of your opponents pitch if you see someone play this in their deck!

Decks like Drone Control and Runeblade Pile were pretty common in Welcome to Rathe and Arcane Rising Limited formats, which I personally hated. However, I often found it was necessary to join the bandwagon without the right card pool because of how effective and relatively easy they were to pilot. This made the Sealed formats pretty boring to play after a while as you often found yourself playing the same style of decks over and over again.

While some matchups will probably still be a grind, filling your deck with random cards that block poorly is a much worse strategy because the quality of the generic cards, even the commons, is much higher than other formats. 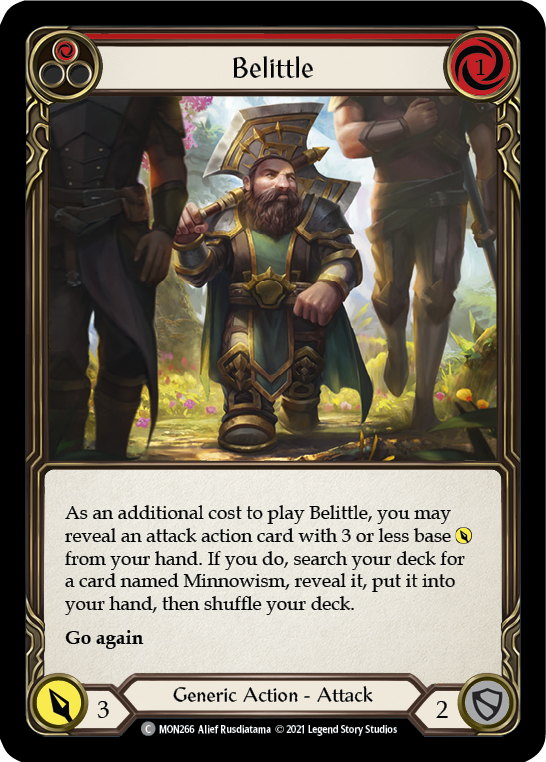 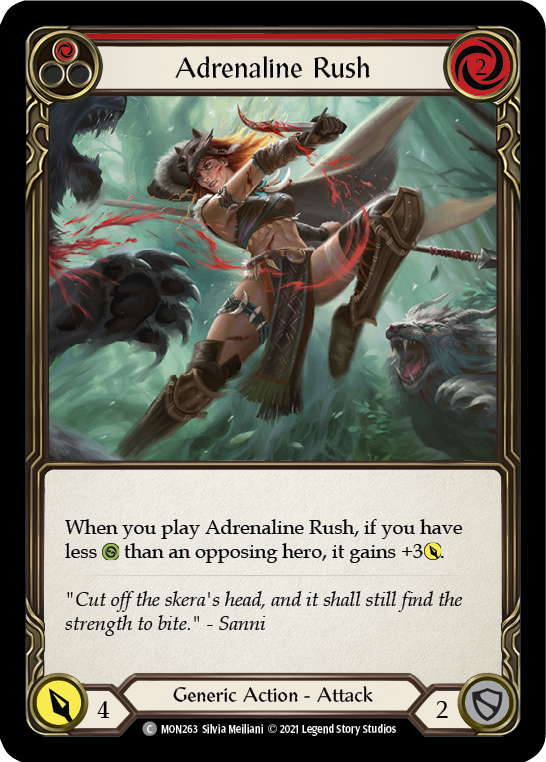 These cards all have an incredibly high rate of return typically. While these have been few and far between in other sets, there are plenty to choose from in Monarch, and these are just the generic commons. This, along with the facts that arcane is barely blockable and that there are very few good defense reactions or life gain effects or generics that block for three makes it much more difficult to survive until the end of the game.

The first two major events of the year will be Limited events featuring Top 32 and Top 8 drafts, according to Legend Story Studios. This puts a big emphasis on learning the Monarch Sealed format with an emphasis on draft, which makes up the majority of the business end of the tournament. The talent mechanic adds another layer to complexity but also gives you far more flexibility as you’re able to change class part way through even after locking in either Shadow or Light.

All in all, I’m really happy with how the Monarch Sealed format feels and can’t wait to explore it some more. It’d be great to hear what everyone else thinks about the set so far!

Avid lifelong card player that has played Flesh and Blood almost as long as it has been in print. Top 8 finisher at all of The Calling events in Australasia (two Limited, one Constructed).