Rhinar is a hero that hasn’t seen as much action as I would have expected through the Blitz season so far. From the Auckland Calling and now as we enter the first two weeks of Skirmish events, both the levels of people piloting Rhinar decks and copies making top cuts of events is low.

Instead, Ira, Crimson Haze continues to be seen in droves across Top 8s of the early Skirmish events alongside Dorinthea. While I think it highly unlikely we see a complete departure from these two at the top tables over the next two weeks of Skirmish in North America and abroad, I expect we will see the meta shift somewhat with decks like OTK (One Turn Kill) Viserai primed to see more play to battle the Ira players. Perhaps we even see fan favorite Ira shift and adapt to include more defense reactions and less cards that can be liabilities in the Dorinthea matchup. Dropping cards like Sigil of Solace (Yellow) and Razor Reflex (Red) which primarily shine in the Kano matchup and instead including extra defense reactions. Beyond Ira, Dorinthea, Kano and Viserai however, there are options. 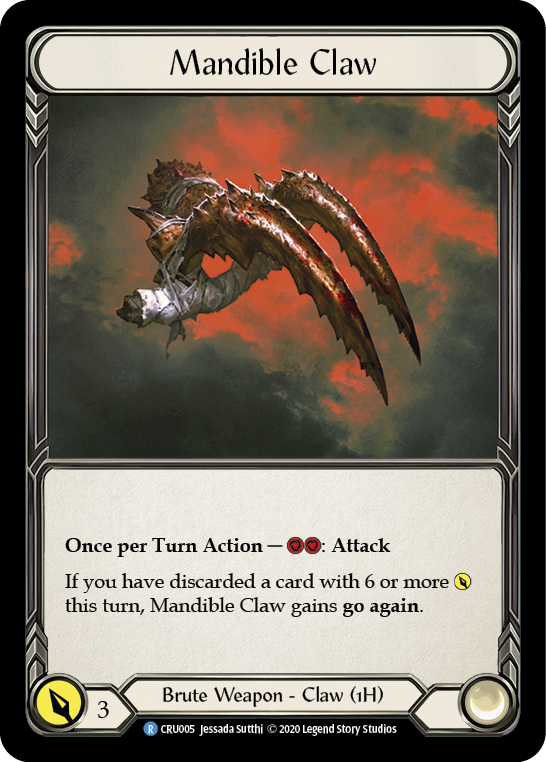 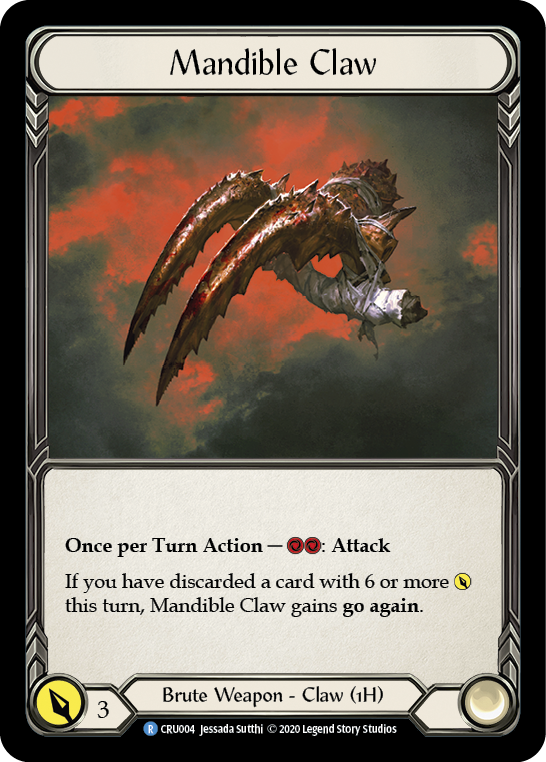 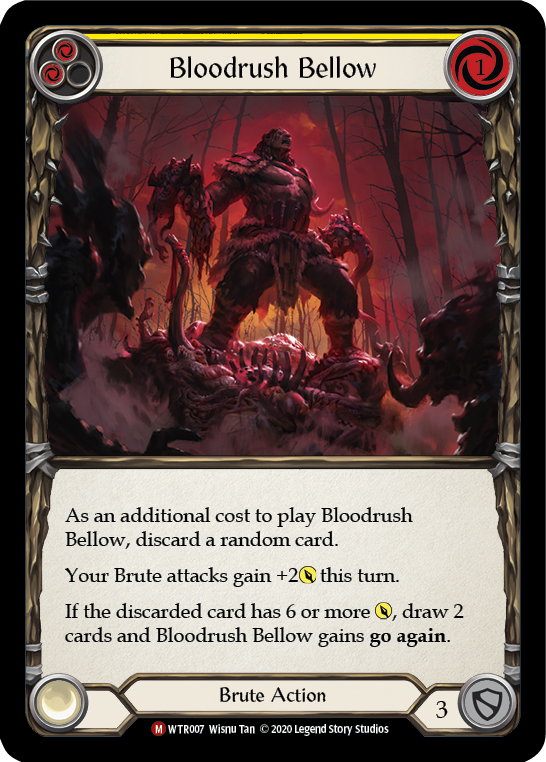 The primary reason I think Rhinar could be a great meta call over the coming weeks is for the reasons above. Ira players will likely move to battle the popularity of Dorinthea, particularly with the emergence of Dorinthea decks dropping all their attack actions in favor of a go-tall build to nullify a lot of the power of Flic Flak. This helps Rhinar’s matchup with Ira, as traditionally the matchup is difficult because you’re not afforded enough time to set up two big attacking turns due to pressure with Ira’s number of offensive and life gain cards. The second reason is that Rhinar has a close to even or favorable match up into most of the fringe decks right now in OTK Viserai, Kano and Dash.

This is the build I would favor right now with consideration to matchups above and the overall meta. The deck aims to be explosive in almost every matchup, setting up Bloodrush Bellow turns to leverage the Mandible Claws. The other common route to victory is to set up multiple sources of intimidate for one big tall attack with cards like Alpha Rampage, Barraging Beatdown, Savage Swing (Red), Savage Feast (Red) and Massacre. Beast Within and Sand Sketched Plan are great enablers for your big turns. Massacre is perhaps one of the most important cards in this build; setting up to have this as the last card in hand when playing an Alpha Rampage, Savage Swing or Savage Feast with go again is one of the best ways to guarantee pushing damage.

Let’s look at the key elements of this deck, the card choices, why they’re important and how to make sure you get the most out of them.

Bloodrush Bellow is your main win condition in this deck – set it in Arsenal and you can happily defend out your opponent’s turns until you find the right combination of cards to ensure you can swing in big with double Mandible Claw and an attack action. One of the strengths of this deck is that there’s a lot of redundancy in your cards that can form potent damage turns. Alternatively, you can pitch one Bellow early to set up a final turn on the bottom of your deck and utilize the second, as previously mentioned, when drawn. 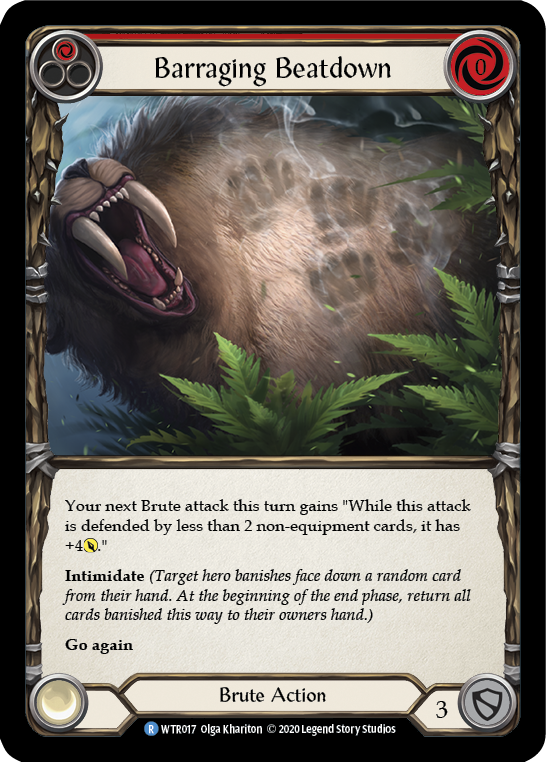 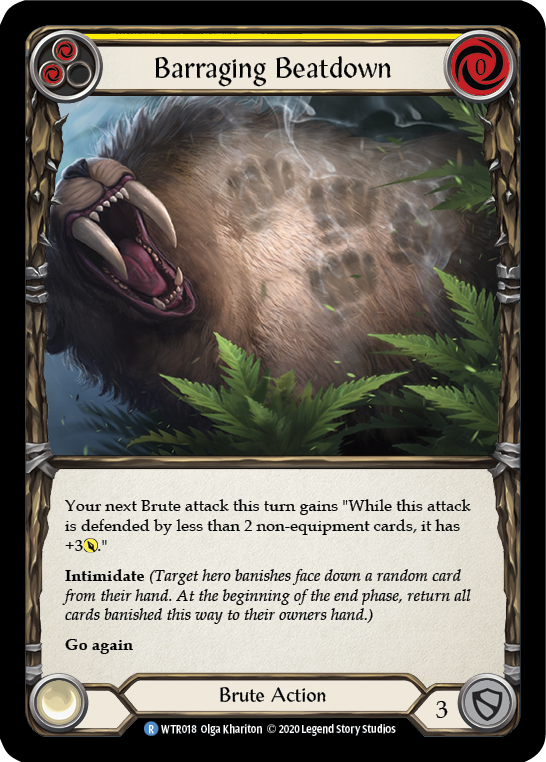 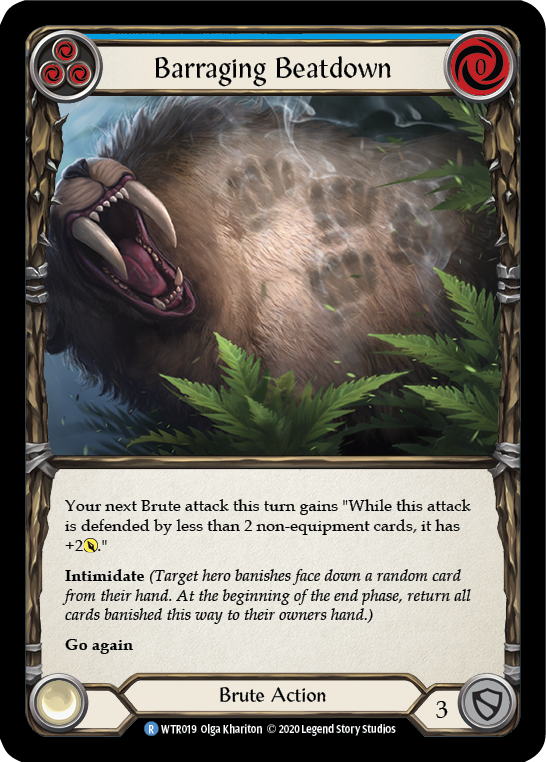 Barraging Beatdown a key non-attack action. You want to ensure you’re always able to guarantee the +X attack effect. Beatdown is generally best used for this reason on go-tall turns involving an attack action that also triggers intimidate plus another intimidate source, or double intimidate. Be mindful if your opponent appears to be set with a defense reaction in Arsenal, as leaving them with any cards in hand will allow them to defend with two cards and negate the Beatdown effect. Another great way to use Beatdowns in a matchup against an aggressive deck is to simply play one out and attack in with a Mandible Claw (or Romping Club if playing it) to force out two cards from hand on defense, reducing the opponents output capability or dealing five to nine damage. 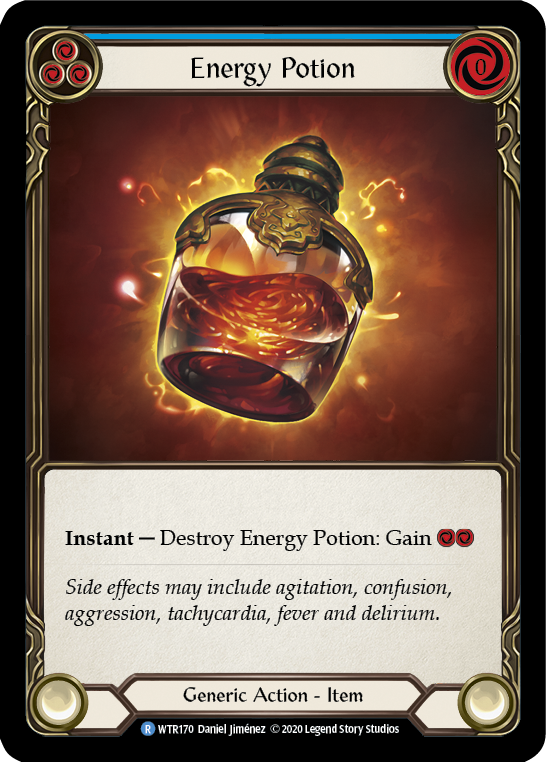 Energy Potion does double duty. It’s vital for your blue count against Kano and it’s also a piece that can help set up big turns out of the deck if you get it into play early. Since the core strategy of this deck is often to look toward setting up big Bloodrush Bellow turns, defending out a turn from the opponent with three cards and dropping an Energy Potion on your turn to enable future turns is often good value. 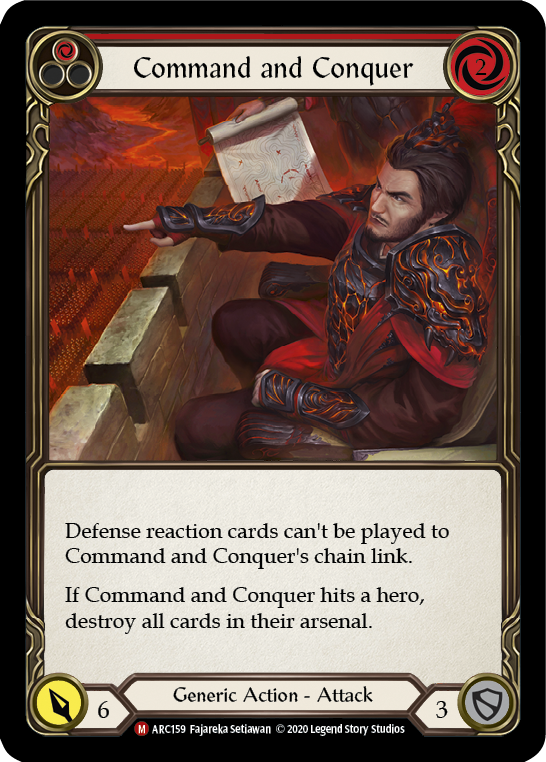 Command and Conquer not only fits well into Brute for the six attack, but it’s a fantastic card on the end of another attack from something like a Sand Sketched Plan, Mandible Claw attacks (with go again enabled) or less often, off the second attack after using Scabskin Leathers. Command and Conquer is at its best as a second or higher attack for the turn to guarantee you either hit and destroy the opponent’s Arsenal or, at minimum, force out equipment defense. However, sometimes you’re just happy taking two cards out of the opponent’s hand, denying them a threatening turn and buying you time. 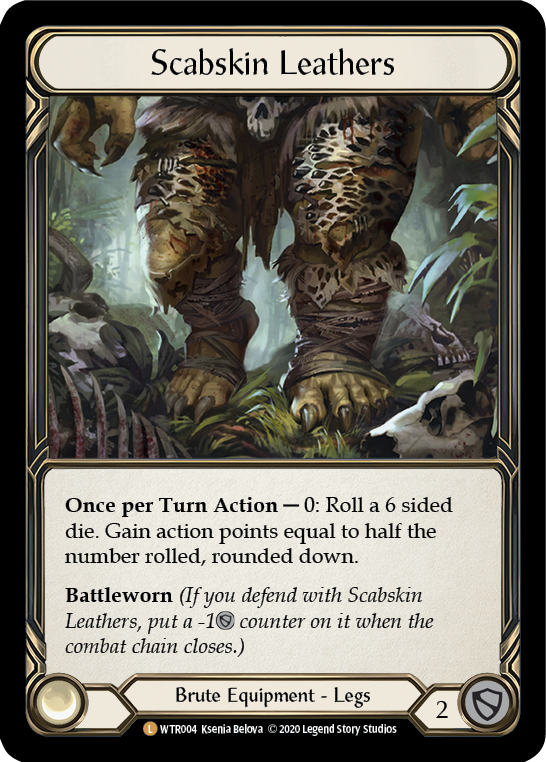 Not just important for its defensive capabilities, Scabskin Leathers has a strong effect that, when used at the right time, can produce an extra action point for almost no cost. The introduction of Gambler’s Gloves allows you to aggressively roll early in certain matchups that might be unfavorable if you can’t apply pressure.

My one piece of caution with this equipment: people roll too often or at the wrong times. You’re putting yourself at a disadvantage using this to gain small edges. When the upside is free, for instance on your first turn, and you couldn’t push damage if you didn’t activate, then it’s fine. Rolling for Scabskin to make a turn slightly better is often not going to be worth it. Not dealing an additional two or three damage is almost always going to be the much better alternative than a one-sixth chance of losing your turn and, consequently, probably the game in Blitz as most decks can punish you for it. 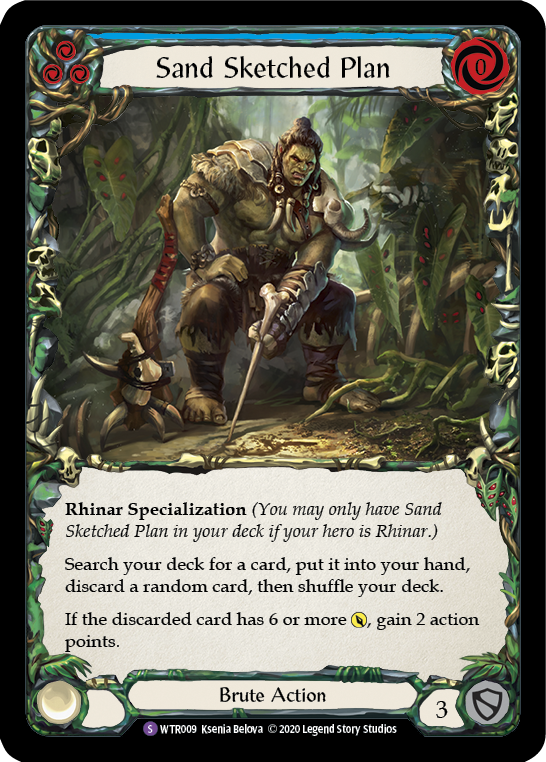 Sand Sketched Plan is truly one of the best cards in Rhinar. The specialization allows you to not only find the right card for the situation but set up a turn with multiple actions – all from a pitch 3 card that defends for three! Generally, the most searched cards are Wrecker Romp (Blue) or Beast Within. Savage Feast (Red), Command and Conquer and Alpha Rampage situationally are great and can be the right cards to go for.

This Rhinar Blitz deck has a number of strong components that, when coupled together on turns, can be devastating. Your default position in most games will be one of setting up these turns and managing your life total between said turns. Bear in mind that if you intimidate away the opponent’s entire hand, they’re likely going to come back at you reasonably strong. Often you’ll be in positions of executing a big turn, then defending heavily on their turn and setting back up for (ideally) a second and final big swing.

Your equipment holds vital roles in executing your game plan in any format and it’s no different here. Some of the equipment in this list are important from a defensive standpoint and others for their ability to help enable your key turns. 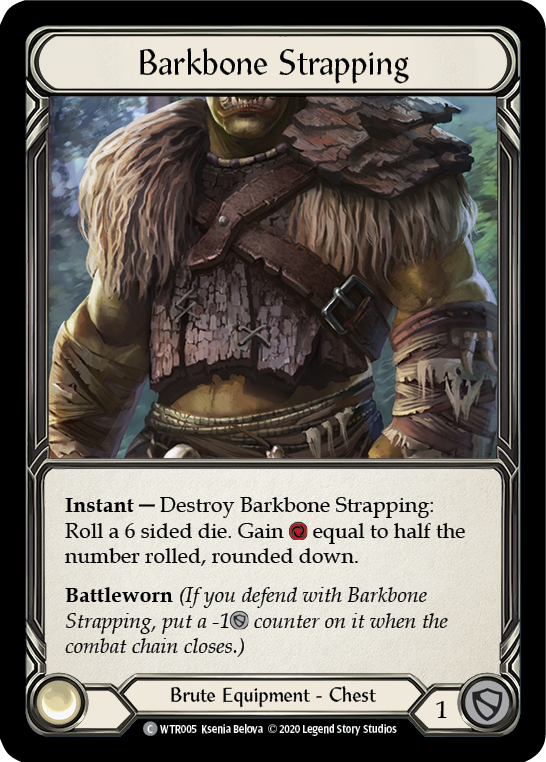 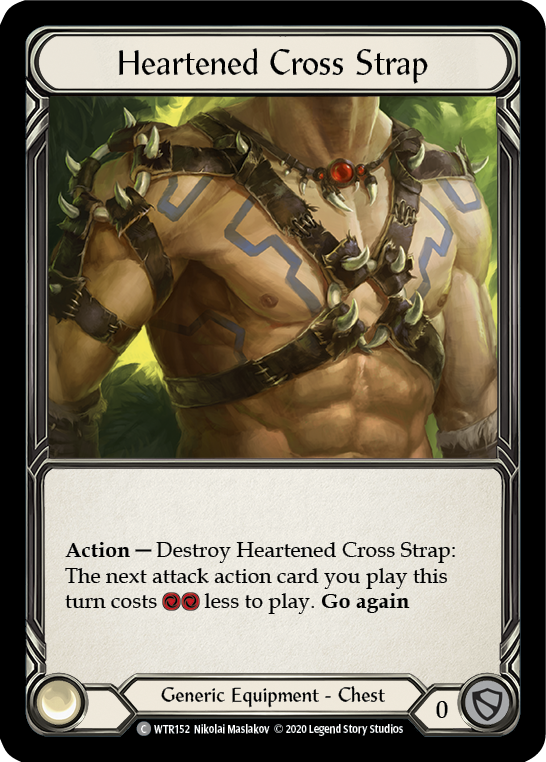 For the chest slot, Barkbone Strapping and Heartened Cross Strap both offer the ability to get resources to enable a big turn from this build – a theme across a lot of the cards in this list. Barkbone’s ability to be able to defend and still provide resources for a critical turn is very important, although not a guaranteed resource.

Heartened Cross Strap on the other hand does guarantee you two resources for a Brute attack action such as Alpha Rampage. Play Barkbone when up against decks where the one defense is important such as Ira, Dorinthea and any other decks that wish to attack and force important on-hit triggers. Cross Strap is good against Kano, Viserai OTK and any more controlling decks where the defense from Barkbone isn’t needed. 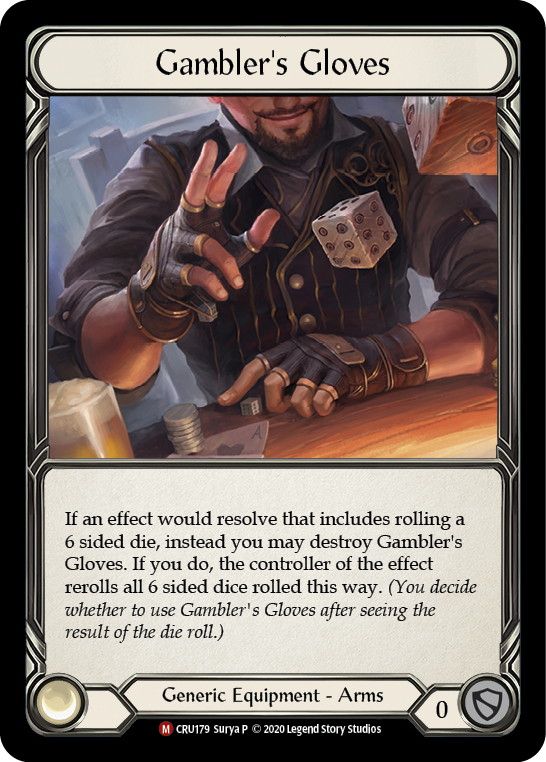 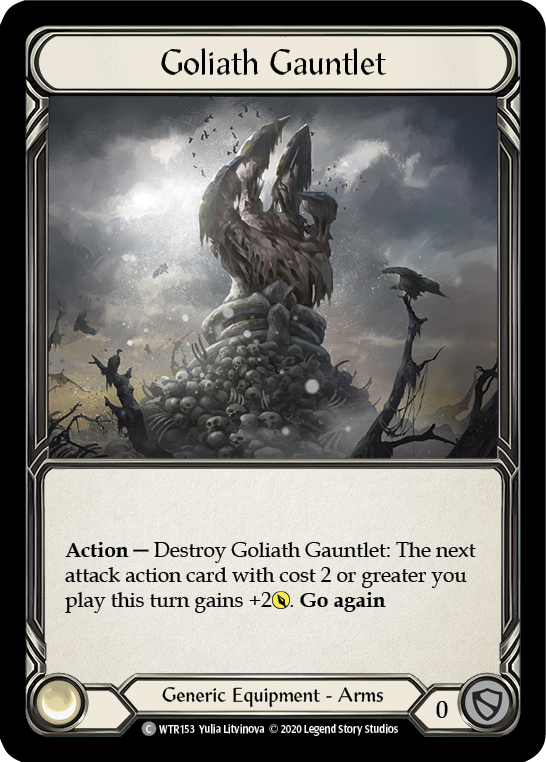 Gambler’s Gloves is going to be most useful for matchups where you want to actively find two actions off Scabskin Leathers or even guarantee two or more resources off Barkbone Strapping. Against aggressive decks though, Goliath Gauntlet is usually better value. Aggressive decks are looking to defend as little as possible; here, Gauntlets is 10 percent of their life total, and it’s even better when paired with a Command and Conquer – a combination certainly capable of disrupting a big turn or demanding multiple cards and/or equipment to be defended with. 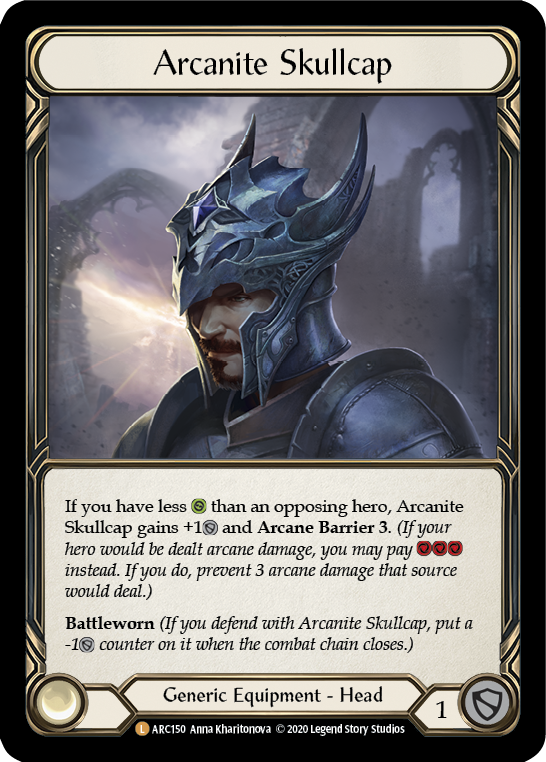 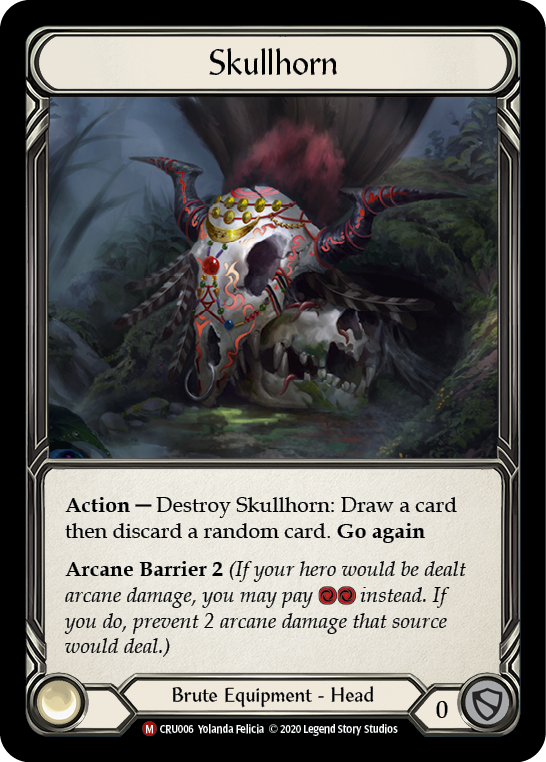 Arcanite Skullcap is an important defensive item to pair with the Scabskin Leathers, again against decks that actively want to trigger on-hit effects or just generally look to attack and put you under pressure. Ninja, Warrior, Ranger and Brute are all classes you highly likely want Skullcap for.

Skullhorn on the other hand is of course great with the inbuilt Arcane Barrier 2 when up against Wizard, however it’s also great against any defensive decks where you don’t need Arcanite Skullcap. Skullhorn is another potential source of triggering intimidate when pushing the extra damage on a Barraging Beatdown turn that can also take the last card away on a lethal attack turn. 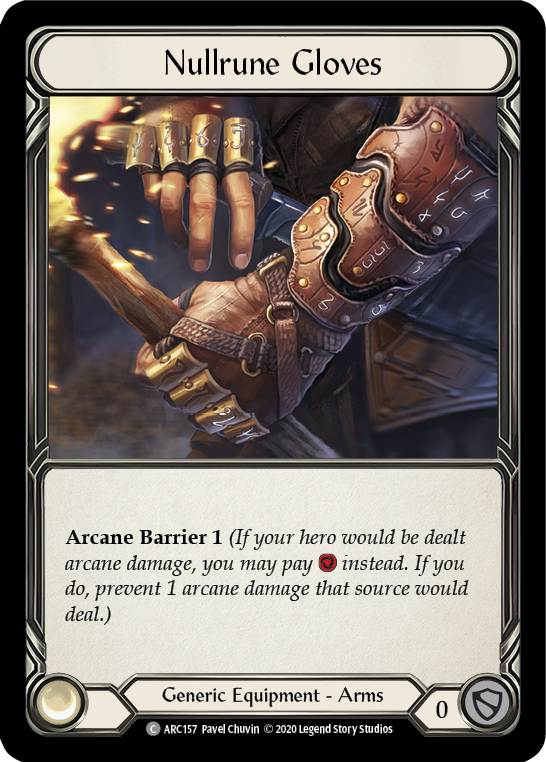 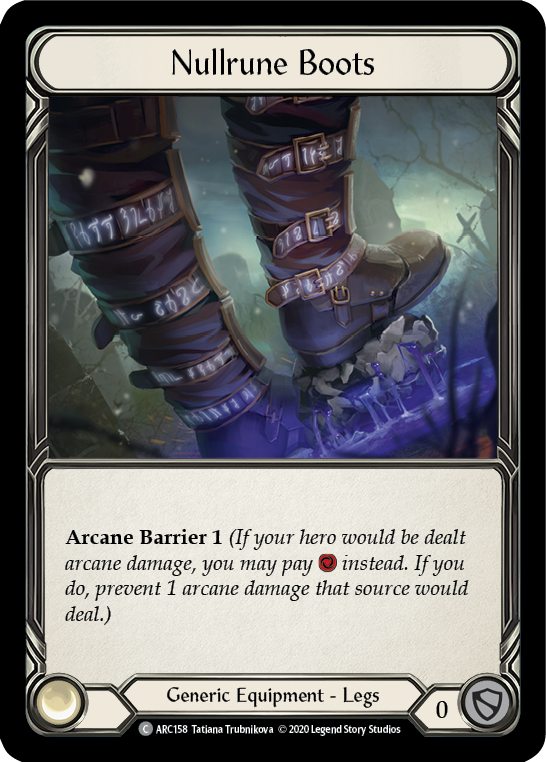 When up against Wizard, you want to make sure you have Arcane Barrier 3; it’s going to work best for your resource base with 12 blues and 15 yellows. You won’t often want to pitch two cards as you’ll be looking to apply as much pressure as possible turn after turn in this matchup.

You’re up against no defense reactions and likely one value of defense from equipment, so it’s actually reasonable to go for a lethal attack on turn two against Kano. So, play the Nullrune Boots alongside the Skullhorn and leave out Scabskin Leathers. Scabskin Leathers aren’t relevant in the Kano matchup as you don’t want to risk a dice role and give your opponent effectively a free turn, plus you want to play Goliath Gauntlet in that matchup as it’s just pure extra damage in a race.

Nullrune Gloves is for the Viserai Matchup. Against Runeblade, you want to have the extra defense of the Scabskin Leathers and there’ll be a turn or two it might be correct to role to push some significant damage. The downside to going for the activated Leathers is pretty low against a deck like OTK Viserai who can’t use their hand to push damage if you roll the one, unless it’s that final turn.

Rhinar really could be a great meta call in the coming few weeks of Skirmish and as a double bonus, this deck is very fun to play. Personally, I’m aiming to play a few different heroes over the remaining Skirmish season and this Rhinar build is high on the list of options. Wrapping up today’s article, I leave you with a few reasons why you might want to pick up Rhinar.

Be sure to leave a comment and let me know how you get on if you do sleeve up Rhinar this Skirmish season, or even for your local armories!

If you’re interested in playing a Skirmish event, they kick off on February 20th and the format online will be Blitz, and in person it’s Blitz or Sealed Deck. You can find out more here, and find an event near you here.

ChannelFireball are hosting our own online Skirmish on March 13th, stay tuned to channelfireball.com for more details coming soon!