Well if anyone was looking for a blue deck to play, this wasn’t a good weekend for you. Come back after the Pro Tour and I’m sure we’ll see some control lists adapted to the current format. Right now? Everything is aggro or midrange with a few outlier combo decks trying to take advantage of it. Magic Online typically slants heavily toward red decks when the price is low, but even taking that into account, all the control decks have packed up and gone on vacation.

So what are we looking at? Well the biggest winner of the weekend was easily RG Aggro based around Dragons and heavy hitters.

While you can argue about the effectiveness of Dragonlord Atarka in the long-term or how there’s no real home for it, she did a fine job being the biggest and baddest threat on the field this week. Most intriguing is how uninterested this iteration of the deck is at overpowering the opposition. Instead, when I say it “goes over the top,” I mean it actually flies over the opponents creatures.

The re-introduction of Courser to this style of deck shouldn’t be a surprise with the amount of Mono-Red Aggro running around, and it helps take over in long green mirrors. With Dragonlord Atarka, Crater’s Claws, and Haven of the Spirit Dragon you have plenty of mana sinks if you hit 10 or 11 mana in a game. Every major threat in the deck avoids the ground game entirely, not even playing staples in other lists such as Boon Satyr or Surrak, the Hunt Caller. Doing this not only nullifies the majority of the blockers in the format, it also negates the use of Roast as a cheap way to keep your 4s and 5s in check.

What does the popularity of RG Aggro at the SCG Open mean? Well if you’re playing in a tournament in that region or the next Open, then the next level is obviously something that can go over the top of these decks in the metaphorical sense, or to adapt RG to the mirror. RG and WG Devotion both look lovely when other people aren’t playing Nykthos or an overwhelming quantity of removal. Dragonlord Atarka was already shown to be quite good at trumping the mirror, Hornet Queen, and Ugin, the Spirit Dragon. Going real deep and jamming Arbor Colossus into Hornet Queen into Atarka is going to trump anything the average RG deck can do.

Well, almost anything. See, the cheap and dirty trump that you can’t maindeck but that crushes the mirror is Mob Rule. 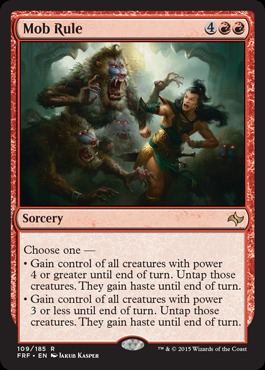 You just steal some Dragons or clear the ground blockers and swing for lethal. But since this is situational at best and a completely dead card early you really can’t afford to run too many. Still it’s a game-breaker if players plan on just jamming more creatures onto the battlefield. Because of this—and the inevitable increase in sweepers thanks to the swarms of green cards and red Dragons—Temur looks a lot better thanks to Stubborn Denial.

While I think Goblin Rabblemaster is pretty poorly positioned right now, Thunderbreak Regent and Stubborn Denial are beautiful together.

Boon Satyr also looks less impressive while control is in hiding. 1-3 toughness is a lot less reliable with the number of Wild Slash and Draconic Roars running around.

Moving forward I can see one of two ways for Temur to look: this traditional build with a bunch of above-average creatures, Crater’s Claws, and a smattering of countermagic, or UR with Dragons, fliers, and Silumgar’s Scorn and red removal to control the first few turns of the game. By skewing toward blue with a smaller green component, you still retain Sylvan Caryatid and Savage Knuckleblade. That may be too clunky to pull off, but while Stubborn Denial is a great card it’s difficult to justify a 3rd color for just a Negate and a nice 3-drop when so many other options are available.

As for the rest of the metagame, both red decks and Abzan Aggro have come up big these past two weeks. While neither are particularly innovating at this stage, there’s something to be said for playing the fastest or the most stable deck in the format. While these decks are good, they are beatable, and Abzan Aggro is even positioned somewhat poorly against mono-Dragons and Roast. Wingmate Roc is no threat to the variety of Dragons around and Siege Rhino and Tasigur both get haumphed by removal. The smaller creatures can be dangerous, but Rakshasa Deathdealer requires a huge mana investment and Fleecemane Lion isn’t a scary card.

Red strategies are a little more interesting in the sense that people know what’s good against them, yet a large quantity of them are still breaking through. Whether this is because of sheer numbers or because it happens to be the least sucky of the aggressive strategies is debatable. In a world where having three colors is increasingly risky, there’s something to be said about sticking with a deck that rarely loses to itself.

Jeskai Aggro and Jeskai Tokens are interesting because they were hyped up as the strategy to beat for the past few weeks and yet have come up short. Both of them have strong core cards so a lot of it has to be laid at the feet of clunky draws and awkward mana. Jeskai Aggro in particularly seems like a strange choice when RG Aggro has co-opted the fliers strategy so well. Jeskai Tokens on the other hand still has Jeskai Ascendancy and now Dragonlord Ojutai as an alternate win condition against decks that are prepared for mass tokens.

What’s more interesting to me is whether GW Devotion will return to prominence since it dominated a very similar format to the one we have right now. It may have only gained Dromoka’s Command and Deathmist Raptor, but nothing in the current format really crushes the deck. Even if Mastery of the Unseen got worse (and it did) there should be a reasonable explanation as to why it can’t just overwhelm opposing green decks with Arbor Colossus and Hornet Queen. Perhaps the current builds are too focused on screwing around with Genesis Hydra and Polukranos instead of playing cards that beat Thunderbreak Regent.

It’ll be interesting to see what happens when the Pro Tour rolls around and potentially provides the strong control strategy other players haven’t been able to find yet.

Deck of the Week

Sometimes even I have to take a step back and just laugh at some of the ridiculous concepts that are possible in Magic. This is a good example of how the non-broken combo decks in Magic looked years and years ago. Without card manipulation there’s no guarantee it’ll ever be able to set up a successful kill turn. But who doesn’t love the Wall synergies and use of Assault Formation as a back-up win plan? Sidisi, Undead Vizier seems like a gimme for finding the key combo piece and likely only isn’t in the deck due to its cost. While this kind of deck has been talked about before, the use of Formation and potential new tutoring options gives it some new angles to explore.