Tainted Pact is a really strange card. Originally from Odyssey, it recently joined Historic by virtue of the Mystical Archives in Strixhaven, and now is the centerpiece of one of the best Historic decks. Today, we’re taking a Deep Dive into all things Tainted Pact combo, since the card (and the decks it’s featured in) has a lot going on. 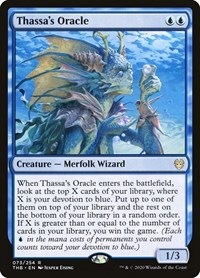 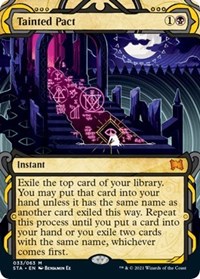 The first thing to discuss is what the Tainted Pact combo is. Tainted Pact cares about card names, so if you can make a deck full of unique names, there’s nothing stopping you from using Tainted Pact to exile your entire deck (well, except the Arena rope, but we’ll get to that later).

Technology has advanced since then. The best way to build your Tainted Pact deck is to have two copies of Pact and two copies of Thassa’s Oracle as the only non-unique cards in deck, which leads to the following lines:

If you have one each of these cards, your deck is now singleton, and you can just cast both for the win. We’ll go over this later, but in this spot, you want to cast Thassa’s Oracle and, with the trigger on the stack, cast Tainted Pact for the win.

If you can assemble two Tainted Pacts, you can go until you find an Oracle, stop, and have the second Pact exile the rest of your deck. It requires more mana, but still leads to a win. This most commonly comes together by getting a Pact from your sideboard (thanks to Fae of Wishes or Mastermind’s Acquisition) or by using Sea Gate Stormcaller.

Having two copies of each card doesn’t cost you in most situations, and means that you assemble the combo of having one of each more frequently. The two cards being a kill together is also why this deck plays so many tutors, as it’s worth even paying three or four mana to assemble an instant win.